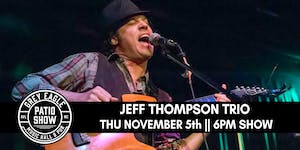 Jeff Thompson is a singer, songwriter, guitarist, and performer. Jeff has won major songwriting contests, even though he thinks it's silly to pit songwriters against one another. He won 1st Place in the Eddie's Attic Competition (other winners include John Mayer, The Indigo Girls, and Jennifer Nettles of Sugarland), 1st Place in the Cary, NC Six String Cafe Songwriter’s Competition, 1st Place in the Evening Muse Songwriters' Competition. He was featured in Performing Songwriter Magazine. Jeff has also won the MountainX Best Of Western North Carolina awards in the Singer/Songwriter category for both 2013 and 2014, 2015, and 2017. He plays all over the Southeastern United States, and has shared the stage with a lot of people you've heard of. He doesn't feel like name dropping, though. He has released two full length CD’s and an EP and recently released his latest studio album, “So Far, So Strange.” He fronts two tribute bands: Off With Your Radiohead (Radiohead Tribute) and Dirty Logic (Steely Dan). Both are based in Asheville and touring the Southeastern United States.