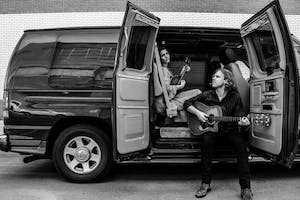 presented by The Grey Eagle

iCal
Google
5j Barrow plays a FREE show on the patio stage at The Grey Eagle in Asheville, NC!

Inspiration seeped through the windows of apartment 5J on Barrow Street looking out over the Hudson River in NYC’s Greenwich Village, where singer-songwriters and Broadway performers, Eryn Murman and Jason Hite, soaked up the energy and passion of musicians, painters, poets and writers who created the Village vibe. Together, they paid tribute to those creative spirits and named their band 5j Barrow, writing music and lyrics with a unique folk/rock sound, touring as a duo, and often picking up Drew Jones on bass and Gerard Canonico on drums. The band has inspired audiences with soulful music, evocative imagery, and lyrics that touch the heart, from the historic Apollo Theater to the open air of Washington Square Park, from the streets of New Orleans to the Rocky Mountains, from California wine country to New England forests.

The duo of Eryn Murman and Jason Hite who originally formed the band in 2011, forged an even stronger bond when they married in 2017. Since then, they’ve toured the country and discovered new inspiration in the mountains of Asheville, NC, a supportive artistic community that resembles the old Village vibe that sparked 5j’s values in independent artistry, community and collaboration. They still travel and tour, a favorite of Sofar Sounds in dozens of cities, and play diverse music venues, house concerts, restaurants, breweries and festivals all over North America.

5j Barrow was named “Best Band in NY” after winning The Greene Space WNYC/WQXR’s Battle of the Boroughs 2014. 5j Barrow released their debut album ‘From the Dim, Sweet Light’ in 2014, and their first two installments of three EPs, produced by Grammy nominated producer David Mayfield, were released October 6th, 2017 (The Journey, Vol. 1) and May 19th, 2018 (The Journey, Vol. 2). The Journey, Vol. 3 is scheduled to release in 2019.