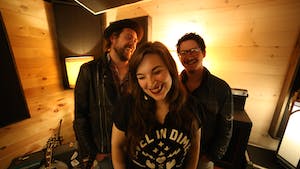 PATIO SHOW: Howl In The Valley

HOWL IN THE VALLEY

In early 2018, Howl In The Valley started as a few Spartanburg, SC musicians sitting in with each other at an open mic on Sunday nights. They quickly evolved into an up-and-coming folk rock trio with powerful, well-crafted songs that stir the soul and tattoo the brain with infectious melodies and memorable lyrics. The trio spent the majority of 2018 perfecting their craft and building a fanbase on stages of all sizes throughout the Carolinas. In November, they took enough time off from gigging to head into the studio to track their debut EP. The first single was released on February 22nd 2019 and the EP was released a few months later on April 5th.

Over the past year, the trio has settled into a strong, energetic, but more acoustic sound, and recorded “Rock Candy Sessions” at Rock Candy Recordings in North Carolina. This release leans into what the band does best — lyric, melody, and goosebump-inducing harmonies. As they work on material for a full-length album, Howl in the Valley wanted to put something out that felt true to who they’ve become over the past year. “Rock Candy Sessions” was released on April 10, 2020 and includes "Drive," a new arrangement of a song off the self-titled Howl in the Valley EP, "Bear Creek," a new original , and "Appalachian Wine," a cover from frontman J. Stephen’s days in pop punk band eleventyseven.