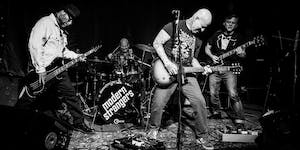 Hard Rocket is a band based in Asheville, NC. It is known for playing tight, energetic, and convicted rock n roll; an ability to musically style-shift while remaining true to its core rock sound; and a deep musical chemistry featuring dual lead guitars and a hard hitting rhythm section. The four band members have played with respected musicians and producers in a variety of live settings and recording studios.

The band released its first ep, Fear is the Enemy, in June 2018. It consists of five tracks that showcase the band’s attention to songwriting and performance combined with a commitment to both instrumental and vocal music. The ep’s art was created by Josh Levy, a nationally recognized rock artist who has created album, poster, and other art for some of the biggest acts in the world. Also based in Asheville, Josh has created an instantly recognizable style that combines a Mad Magazine sensibility with intensely psychedelic patterns and colors that often depict sci-fi and dreamscape worlds.