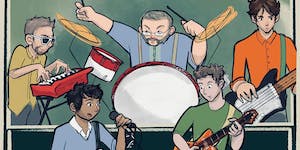 This band started on a perfect 70 degree day, sitting out at New Belgium watching the Connells play. Elzy Lindsey (Drums) and Derek Allen (Lead Guitar) were both in that blissed out crowd, surrounded by the sound, gazing around at the smiles and heads-bopping, singing every word. We knew that many bands like this never got their full due, and, frankly, most people may have never heard their stuff. We decided right then and there to change that. We created YouTube playlists and sent them back and forth and set about finding kindred spirits. Derek and Charlie McCanless (Bass) had an on-going Father-Son gag, being decades apart in age, and had been jamming together on guitars, Elzy started searching for others to round out the sound. The core of the band held a few auditions and, after a very short time, had Jeff Santiago (Lead Vocals/Guitar) and Bill Kopp (Keys/Backing Vocals) joining the band.

Fast-forward a few months... the band has crafted a set of the greatest hits of the underground college rock scene of the late 80s/early 90s. Featured heavily are the Connells, Dillon Fence, the dBs, Letś Active, Neutral Milk Hotel, REM, Drivin’and Cryin’, Guadalcanal Diary, as well as college radio darlings of the era, like the Smithereens and Hoodoo Gurus.

Debuting at the Grey Eagle, they showcased their diverse, yet accessible catalog. Look for Father Son Picnic around town this summer.