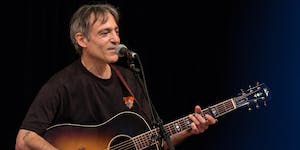 Chuck Brodsky is a storyteller, songwriter, troubadour, and a modern day bard. With only his acoustic guitar and his voice he’ll draw you in with genuine, down-to-earth warmth and his quirky, finely crafted songs. Using wit and irony, set to haunting melodies, he tells the stories of oddball and underdog characters through his syncopated guitar strumming or sweet finger-picking. His songs celebrate the goodness in people—the eccentric, holy, profound, courageous, inspiring, and the beautiful. They poke fun at what needs to be poked, and sometimes they challenge. They’re sworn to tell the truth.

Born and raised in Philadelphia, a very young Chuck fell in love with the piano. Despite taking lessons, he still managed to teach himself how to play. Years later, on his first day of university orientation, he saw two guys playing guitars. He soon got one of his own, transferred out of the university and into the school of life. Influenced by Bob Dylan, Woody Guthrie, Lowell George, John Hartford, Jackson Browne, Bruce Springsteen, Greg Brown, The Rolling Stones, and Nic Jones, Chuck started writing songs in a style that is very much his own, yet pays homage to the traditions.

After hitchhiking to San Francisco and singing weekly at the Tattoo Rose Cafe’s open mic, Chuck spent a few years singing for tips on the streets of Europe, and worked as a fruit picker back in the USA. In the late 1980’s, he began performing in small coffeehouses around the San Francisco Bay Area. Winning the "Emerging Songwriter Award" at the Napa Valley Folk Festival in 1992, the following year he was warmly embraced at the Kerrville Folk Festival in Texas. For the past 23 years, Chuck has performed at festivals and in concerts all across the USA, Canada, Ireland, Denmark, England, Israel, Lithuania, Latvia, Wales, and the Shetland Islands of Scotland.

Since 1995, each of his ten albums has been critically acclaimed; most recently his 2013 release The Baseball Ballads 2, which was named to MOJO Magazine’s top ten list of Folk albums for 2014. Four of his early cds were produced in Atlanta by Kristian Bush of Sugarland, while his most recent four studio recordings were produced in Cape Breton, Nova Scotia, by J.P. Cormier. His March 2015 release, Tell Tale Heart, is self-produced and was recorded in Asheville NC.

Chuck’s passion for our National Pastime and its colorful, offbeat characters is evident in his two albums full of Baseball tales. Such characters as the first white man to play in the Negro Leagues, a pitcher who threw a no-hitter while high on LSD, a catcher who was also a spy during World War II, a base-runner who cost his team the pennant by not touching a base, The Clown Prince of Baseball, and Chuck’s favorite player from his childhood who was booed by the hometown fans.

Chuck Brodsky has performed three times at the National Baseball Hall of Fame, and 20 of his celebrated Baseball story songs have been enshrined in the Hall’s sound recording library. His beloved Philadelphia Phillies featured his song “Whitey & Harry” and an interview with Chuck in the documentary about their legendary Hall of Fame player and broadcaster, Richie Ashburn. The 2003 Sony Pictures film “Radio” featured a cameo appearance by Chuck and his closing title track. “Moe Berg: The Song” can be heard in the film “Jews and Baseball,” which aired on the PBS Network. Kathy Mattea’s recording of his “We Are Each Other’s Angels” is the closing track in the 1998 film “Dear Mr. Goodlife,” and eleven of Chuck’s songs appear in the 2011 film “The Deposition.” His song “Blow 'em Away” recorded by David Wilcox, and many others, also appears on the Christine Lavin produced “Laugh Tracks” and has been a long time favorite of the Dr. Demento show.

Chris Rosser is a multi-instrumentalist, singer-songwriter, composer and producer. As a solo performer, he has opened shows for folk and pop luminaries such as John Mayer, Tom Rush, David Wilcox, Shawn Mullins, John Gorka, Nickel Creek, and more. He has released four solo singer-songwriter recordings, Archaeology (1998), The Holy Fool (2000), Hidden Everywhere (2006) and A Thousand Hands (2014).

Rosser illustrates his talent as an instrumentalist and composer in the world fusion trio Free Planet Radio. He plays the Indian dotar, sarod, Turkish cumbus oud, melodica, piano and guitar on their four album releases New Bedouin Dance (2004), The Unraveling (2008), Global Symphony Project (2016) and Stillness(2018). He also tours internationally as the keyboardist with master Turkish musician Omar Faruk Tekbilek, and plays piano, guitar and oud in Grammy-winning flute virtuoso Rhonda Larson’s ensemble, Ventus. In 2014 with Ventus and in 2016 with Free Planet Radio, he performed over 60 concerts in the top concert halls of the People’s Republic of China. In 2015, he began touring as the guitarist for renowned singer Lizz Wright's band.

Rosser has won songwriting contests at the Rocky Mountain Folk Festival and the Merle Watson Festival, has showcased twice at the Falcon Ridge Folk Festival and was a New Folk finalist at the Kerrville Folk Festival. As a recipient of the 1999 WNC Regional Artists grant, he continued his studies of Hindustani classical music and the sarod (a 25-string fretless Indian lute) with world famous Indian musician Ali Akbar Khan in San Rafael, CA. In 2003 and 2017, he was awarded a prestigious songwriter/composer fellowship from the NC Arts Council. Chamber Music America awarded him and Free Planet Radio a grant in 2014 to compose and perform a three movement piece for the trio plus string quartet. Rosser earned a Bachelor of Music from the University of Miami School of Music where he studied jazz piano and studio recording.

In addition to performing, Rosser has produced and engineered over 200 CD projects for other artists in his Hollow Reed Arts recording studio in Asheville, NC. He has composed music for national commercial spots, and TV shows on Animal Planet, TLC, Oprah Winfrey Network, PBS and more. His song “Make A Wish” was featured in the TLC show “Jon & Kate + 8” during an episode with 12 million viewers. He composed the score for the pilot and eight episodes of the TLC TV show “United Bates of America.” He produced and engineered the album “Unity” for Sean Johnson & The Wild Lotus Band which debuted at #1 on the iTunes World Music Chart.