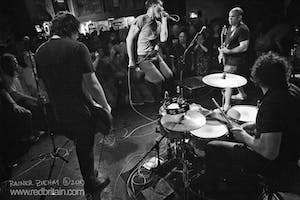 Born in the 1990s in Columbus, Ohio, New Bomb Turks are one of those​ groups that will forever mark the punk rock story. To see a concert of​ the quartet is to live a forbidden experience, a moment suspended​ between madness, screams, trances and electric shocks. The leader Eric​ Davidson does not come on stage, he takes it and leaves it only once​ the public ko standing. Their records have been published by the best​ American punks, from Crypt to Epitaph, from Fat Wreck Chords to Gearhead.​ -Jostone Traffic / Google Translate

"Not only have both prole-threat punk bashery and destructo-rock found​ fresh voices, they've been melded into a seamless new terror all its​ own” - Alternative Press

“Why anybody would’ve cared about a ‘punk rock’ record in 1983, much​ less 1993, is a good question to ask your clergyman, but these four​ Ohio boys are the only band I can think of lately that even attempts​ to play said genre as the rock’n’roll it was intended to be...” –​ Chuck Eddy Spin Magazine

You’ll never confuse “Lone Gone Sister” with “Good Golly Miss Molly.”​ The eighth missile on the 14-track blitzkrieg that is “!!Destroy-Oh-​Boy!!” is a collision of revved-up guitars, bash-and-crash beats, and​ vocal snot that sounds like an auctioneer howling over a high-speed​ R&B party. But, in teen spirit, it is more akin to Richard Wayne Penniman than Nirvana, who allegedly changed music forever. At least​ until bands like the New Bomb Turks led a ragtag revolt in the other​ direction, back to primitive caves that spawned rock ‘n’ roll​ troglodytes throughout the ages. – John Petkovic

Nine Pound Hammer first played at The Ross Theater, openning for the Xtian rap group, The Disciples Of Decadence, in nearby Evansville, Indiana, with drummer Toby Myrig, David Epperson, and bassist Brian (Forrest) Payne, in 1984. David and Brian left, and Bart Altman, thunderstick man from The Disciples Of Decadence, joined on bass. This lineup played locally in Owensboro, Kentucky and Evansville Indiana, garnering a very loyal following before relocating to Lexington, Kentucky as the Raw Recruits. The band then changed their name to The Black Sheep and became the house band at Great Scott's Depot. Darren Howard replaced Toby, and the band became Nine Pound Hammer again. The name of the band is taken from the Merle Travis song Nine Pound Hammer.

Brian Moore (Active Ingredients) and Rob Hulsman (Tarbox Ramblers) joined on bass and drums in 1988, just before recording the band's first LP, The Mud, The Blood, and The Beers.

The band has six full length albums and several EPs.

In 2005, Nine Pound Hammer was asked to pen a theme song and lyrics for 12 oz. Mouse, a new Adult Swim animated series showing on America's Cartoon Network. Singer Scott Luallen also appears in the series as the voice actor for the character Roostre. More recently, they were featured on Aqua Teen Hunger Force Colon Movie Film for Theaters Colon the Soundtrack with the track "Carl's Theme," in which the lyrics play off of the character "Carl" and one of his lines in ATHF. (Taken from Wikipedia.

1985: Blaine Cartwright and Scott Luallen, natives of a small western Kentucky town (Owensboro) first played at The Ross Theater in nearby Evansville, Indiana, with drummer Toby Myrig, David Epperson, and bassist Brian (Forrest) Payne. David and Brian left, and Bart Altman joined on bass. This lineup played locally in Owensboro (KY) and Evansville (IN) before moving to Lexington (KY) as the Raw Recruit. The band then changed the name to the Black Sheep, and became the house band at Great Scott's Depot. Darren Howard replaced Toby, and the band became Nine Pound Hammer again.

Rob Hulsman (drums) and Brian Moore (bass) join and record "The Mud, the Blood, and the Beers" LP for Wanghead in 1988. Matt Bartholomy replaces Brian on bass.

They tour Europe again with Ohio band Gaunt, including a show at The Vera, in Sweden. (A live recording of this infamous show would be released in '99 as a double LP/cd.) Adam Neal joins on drums for a U.S./Canada tour.

Blaine ( with wife Ruyter Suys and Hammer drummer Adam Neal ) forms the band Hell's Half-Acre, which (after several drummer/bassist changes) becomes Nashville Pussy, who tour incessantly and are nominated for a Grammy. Nine Pound Hammer is on hiatus during this time.

In Spring 2002, three shows featuring new material and a new drummer (Brian Pulito) are played in Atlanta (4/6), Lexington (5/17) and Nashville (5/18). Shortly thereafter, in May 2002, the boys record a new album on the analog setup at Barrick Studios (Glasgow, KY). In the fall, they play Birmingham, Alabama and Austin, Texas.

2008 Sex, Drugs and Bill Monroe was released on Acetate Rec's.

Cloud City’s Casket’s blistering guitar driven take on punk rock and roll is influenced just as much by 80s guitar rock like AC/DC and Motorhead as it is punk/hardcore bands like Zeke, Nashville Pussy, and the Bronx. If fast, loud, and obnoxious is your bag, it is spoken here.

Vocalist, Zachary McMakin says “Punk Rock aint broke and we sure aint here to fix it. We have no need to musically reinvent the wheel, we are here to just run it as fast and hard as we can until it goes flat.”