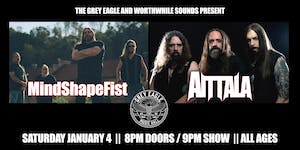 iCal
Google
MindShapeFist, Aittala and Broad River Nightmare join forces for a night of North Carolina METAL at The Grey Eagle in Asheville on Sat 1/4!

Mindshapefist has shared the local stage with Down, Five Finger Death Punch, Saliva, Wolfmother, Crossfade, Rehab, High on Fire, and Jucifer, among others.

The music of AITTALA (pronounced 'EYE-tah-la') crosses many metal genres; it’s hard to put it into just one category. The sound infuses elements of classic heavy metal, doom, progressive, power, thrash and hard rock with lyrics drawing inspiration from the darker side of the human condition.

The AITTALA sound has been cited for being unique which is no easy feat in the metal genre.

The first version of AITTALA was formed in 1991 while Eric living in Holland. With fellow American Tim on vocals and Dutch bandmates Ed (drums) and Jon (bass), the band became a staple of the Dutch metal scene.

With the release of the 3-song EP 'Selling Heaven' in summer of 1993, AITTALA opened for such bands as THE GATHERING and SADIST.

Unfortunately as the demo started to create a buzz in the underground European metal scene, Eric had to return to the US and disbanded AITTALA.

Over the next decade or so, Eric played in numerous bands (TRIBE, MAGNETHEAD, DWELL) and lost focus on AITTALA.

Near the end of the 00's, Eric decided it was time to refocus his efforts on the AITTALA brand.

Each album showcasing a natural progression of songwriting and lyrical content but retaining the core AITTALA sound and evolving it.

In 2019, AITTALA signed with Curtain Call Records and released the band's fifth full-length album 'False Pretenses'. It was 10 brand new songs that not only continued the songwriting evolution of heavier but catchy songs, but also sonically. AITTALA used an entirely different approach for the recording, mixing and mastering to create the best AITTALA album to date.

The current lineup of AITTALA consists of Gary 'Zeus' Smith (THE FIFTH, ex-MR BLACKWELL) on drums and Ali Lugo (ex-DOPESICK, ex-AGE OF DESPAIR) on bass. They continue to write, record and tour to bring AITTALA to the masses.

In 2013, in a dirty, dingy dungeon, Broad River Nightmare came together to create a filthy sound that we call 'Appalachian Stoner Death Thrudge' for lack of a better term. We never shy away from flourishes of funk and blues either. Our shows have been drawing decent size crowds and we pride ourselves on always giving 110%, at every show.