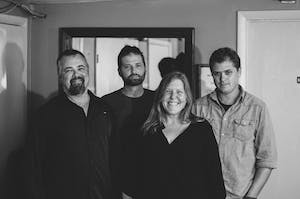 iCal
Google
Many A Ship's album release show for "Sturdy Little Boat" at The Grey Eagle in Asheville, NC! Grab your tickets now.

Many A Ship is an indie-folk-rock band deeply rooted in the mountains of Western North Carolina. The band formed in the summer of 2017 when four longtime Asheville musicians joined forces for the greater good — featuring Vickie Burick (guitar, vocals), Sam Brinkley (drums, vocals), Josh Gibbs (lap steel) and Andy Gibbon (bass). Many a Ship highlights original songs by Burick, brought to fruition through the talent and creativity of Brinkley, Gibbs, and Gibbon. Collectively their music is a sea of stories about life, love, heartache, truth, sadness, and hope.

Wayne & Jonas of Better Twin who will be opening the show + several special guests (who also appear on the album) will be performing with Many A Ship!