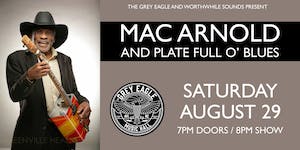 In late 1966, at age 24, came the opportunity of a lifetime to join the Muddy Waters Band and help shape the electric blues sound that inspired the rock and roll movement of the late 60’s and early 70’s. Regular guests of the band included Eric Clapton, Paul Butterfield, Mike Bloomfield, and Elvin Bishop. The Muddy Waters Band (as a unit) shared the stage with the likes of Howlin’ Wolf, Elmore James, Jimmy Reed, Junior Wells, Big Joe Williams, and Big Mama Thornton just to name a few. During this time, Mac played on John Lee Hooker’s “live “album, Live at the Café Au Go-Go, as well as Otis Spann’s classic recording “The Blues is Where It’s At”.

Here is how he met Muddy Waters...

In 1965, having already established himself back home as a bass player, playing with J Floyd & the Shamrocks including James Brown on keyboard , Mac Arnold decided to take a trip to Chicago to check out the Blues scene. He was obviously impressed because 3 months later 24 year old Mac packed up and moved to the Windy City to expand his music career.

There was a club called the Green Bunny Club on 77 & Halstead St. where Mac first met his sax man A. C. Reed who at the time needed a bass player. Mac was the right man for the job. He played with A. C. for only a short time when he got a chance to play with Muddy Waters. He was asked to come out to Big John’s Grill on the North side to sit in with the band. Muddy asked him where he was from, he replied Greenville, South Carolina. Muddy said, “son, if you’re from the South, then you can play,” and so he did for over a year. His first gig with Muddy was the Mother Blues Club. The band’s line up was Luther Johnson on guitar, Sammy Lawhorn on guitar, Frances Clay on drums, Otis Spann on piano, Mac Arnold on bass, and Muddy on guitar and vocals. The band would play most of the show and Muddy would play the end of the set. On occasions he would play every other set. This gave the guys a chance to show their stuff. Mac had an edge because he’d been working with James Brown in the past. A lot of people had yet to of heard of James Brown, so when Mac would play that funky stuff, it got a lot of people’s attention. Mac is a left handed bass player, and if you listen to some of his early recordings, you will hear he was way ahead of his time.

The band would tour from the East to West Coast and all points in between. Cruisin’ in a 1965 Fleetwood Cadillac, all 7 band members and the driver (Bo) at the wheel. Bo could drive almost non-stop from St. Louis to San Francisco with no sleep. One time they were passing through Mississippi, they stopped in to see some of Muddy’s relatives and wound up doing a show. Mac stayed at Muddy’s cousin’s house, and when L. A. he would stay with George Smith and his family of 6 kids. While touring the West Coast, Mac fell in love with the California weather. When he returned to Chicago he told his wife “we’re moving.”

Mac talked to Muddy and told him he would give him time to find another bass player. Muddy wished him luck and said “he would have him back any time,” and that was it. Mac is one of the last surviving members of the Muddy Water’s era, and so Mac Arnold & Plate Full O’ Blues begins.

Mac now resides in Pelzer, SC, where at the age of ten he got his first taste of the blues when he learned to play his brother Leroy’s home-made guitar. Going back to his roots, Mac is serving up a mess of Blues with his own band, “Mac Arnold & Plate Full O’ Blues”. The band consists of Austin Brashier on lead guitar and vocals, Max Hightower on keyboards, harmonica, rhythm guitar, bass and vocals, Dizzy Dizzy on drums, and Mac Arnold on Slide and Rhythm Gas Can Guitars, vocals and bass. Mac is also an organic farmer.

The Blues Music Awards have taken notice of Mac Arnold over the past few years. Mac was on hand for the 31st annual Blues Music Awards held May 6, 2010 in Memphis. Mac accepted the award for Best Historical Album for his participation on the 1966 recording Muddy Waters - Authorized Bootleg: Live at the Fillmore Auditorium (Geffen Records) The recording was released in 2009.