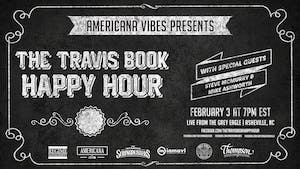 Acoustic Syndicate is a musical institution. Since 1994, their unique blend of bluegrass instruments, rock sensibilities, and conscious songwriting has inspired a generation of musicians. Through 7 albums, thousands of performances, and tens-of-thousands of miles, Acoustic Syndicate has long been heralded as one of the important influences on the modern roots-music revival.

Always a family affair, the band is fronted by Steve McMurry on guitar and vocals, and his cousin Bryon McMurry on banjo, guitar, and vocals. Their signature three-part blood harmony is rounded out by Bryon’s brother Fitz on drums and vocals. Multi-instrumentalist Jay Sanders holds down the bass with deep pocket and style.

If there was ever a band that could capture the universal truths of life from the roots up, it’s Acoustic Syndicate.

Michael Ashworth is a session performer, producer, teacher, and touring artist. He is a multi-instrumentalist, equally adept at guitar, bass, drums, and percussion.

He also teaches and plays banjo, mandolin, keys, dobro, and fiddle. From a musical family, Ashworth “can’t remember a time when music wasn’t a central focus” of his life. An artist that can’t be pigeon-holed, Ashworth’s musical influences run the gamut from John Hartford to John Bonham.

Ashworth’s versatility as a multi-instrumentalist lends itself to session recording. His work can be found on:

Teaching has been a big part of Ashworth’s life for over a decade. In addition to private lessons, he is co-director of the Junior Appalachian Musicians (JAM) program. JAM operates through The Boys & Girls Club of Transylvania County with a mission of teaching traditional Appalachian music to school-age children. His students range in age from five years old to eighty-six.

In 2013, Ashworth signed on to a cross-country tour with Steve Martin & Edie Brickell. Ashworth will join the Grammy-winning Steep Canyon Rangers in supporting Martin/Brickell’s new record Love Will Come For You. Find tour dates and television appearances at stevemartin.com. Most recently, The Steep Canyon Rangers announced Ashworth as a permanent addition to their solo act.