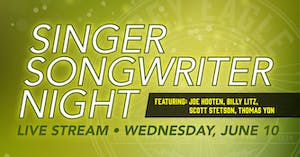 Kid Billy (Billy Litz) is an Asheville, NC based multi-instrumentalist and singer with a lust for song-writing who fuses the American roots music styles of blues, early jazz, soul and country. He has been called "A prolific tunesmith...Blessed with a distinctive lead voice — high, thick, suitably retro” - Bold Life Magazine. His diverse skill-set on trumpet, piano, harmonica and guitar don't just challenge the standard concept of a singer-songwriter, they break the mold. When not performing as Kid Billy, he tours the East Coast with the 4-piece soul/rock band Hustle Souls who were recently named one of "Music Connections" Hot 100 Live Unsigned Artists & Bands

Thomas Yon grew up along the River and Tracks of the Nantahala Gorge right outside of Bryson City, NC; while his father ran a Boiled Peanut Shack and played his guitar with Thomas at his side. Thomas developed the talent of harmony, but also strong lead vocals.

By the age of 8 he was in his kayak on the river by day and his evenings spent singing at local venues and even at Fairs. Notably at 10 years old he made his way to the large stage at the Georgia Mountain Fair.

He had two loves; whitewater and music, but his heart was torn between them. Choosing the wilder of the two he ended up chasing after waterfalls and National Whitewater Competitions bringing on 1st and 2nd place in many.

But he could always be found playing his guitar and singing after his adventures, usually around a campfire or on the tailgate of his Chevy Pickup truck. In 2014 His life made some dramatic turns and with his heart on his sleeve he put down the paddle and picked up his guitar full time.His soul bled out in ink onto paper, leaving a mark not forgotten.

Thomas’ music is infused with the sound of ole’ Country, Folk and Rock, passionate vocals and lyrics that take you down memory lane; with Ideals of love, mistakes, growing old, injustices, moving on, standing up and just appreciating the life we have.

Born and raised in Rochester N.Y. and now an Asheville resident for the last 15 years. Scott had an early start by playing Punk Rock in some of Rochester’s most popular clubs while still in High School and since playing in a couple bands in Asheville, N.C. including the Dirty Badgers and Cat & Crow. Scott enjoys the opportunity to share the stripped down, emotional side of just a voice and acoustic guitar. Crafting honest songs about love, life, murder, and broken hearts.

Tin Roof Echo, the recording moniker for Asheville, NC based musician, Joe Hooten, has evolved from the humble beginnings as a bedroom-folk project to the solo performing artist that he is today. Born in Macon, GA, his first band originated in Charleston, SC- the surf-punk trio J-Cubed, since then Hooten has independently recorded & released five DIY albums, four full-length and one EP of original music. Most recently, three albums of live material have also been released to highlight his solo performances.