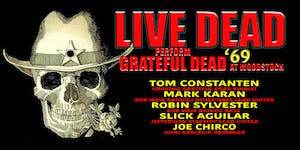 LIVE DEAD '69 has acquired a stellar reputation for performing the classic "Live Dead" album in its entirety. They will perform and elaborate on Grateful Dead's 1969 Woodstock set.

This all-star ensemble consists of:

Tom Constanten — Original Grateful Dead pianist who played all the keyboards on the "Live Dead" recording. He was inducted into the Rock & Roll Hall of Fame in '95, and was essentail Grateful Dead's "Anthem Of The Sun" and "Aoxomoxoa".

Mark Karan — Lead guitarist with Bob Weir's RatDog and The Other Ones.