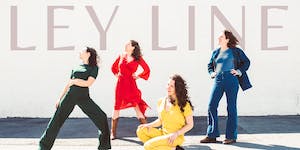 Presented by The Grey Eagle and Worthwhile Sounds Present

iCal
Google
Ley Line brings their unique blend of world music and Americana to The Grey Eagle in Asheville on Thursday July 9!

Four voices coalesce, rooted in rhythm. Raised on the North American traditions of blues, folk, and soul and inspired by their world travels, the four women of Ley Line transcend genres and languages. Ley Line creates a global soundscape; blending influences from Brazil, Latin America and West Africa. Dynamic harmonies run like a current through textures of stand up bass, guitar, ukulele and world percussion. With strong ties to world folklore traditions, Ley Line’s multilingual compositions evoke the beauty of the human experience through our connection to nature and each other.

Ley Line is the musical merging of two duos. Austinites Kate Robberson and Emilie Basez met twin sisters Madeleine and Lydia Froncek at the Telluride Bluegrass Festival in 2013. Since reuniting in Austin in 2016, Ley Line has been weaving together their individual journeys into a collective vision to unite audiences around the world. Their eclectic music explores balance and harmony between the unique perspectives of the four songwriters and instrumentalists.

The band’s debut album “Field Notes” released in 2016 is a compilation of original songs and world folk songs from Brazil. In the summer of 2017, the women of Ley Line returned to Brazil to further explore the roots of their musical inspiration. Over the course of three months, they traveled over 3,000 miles playing shows and capturing video footage and inspiration for their upcoming album. The visual album to be released in the spring of 2020 will incorporate original music and imagery inspired by the natural beauty, folklore and rich musical traditions of Brazil.

Spring of 2019 marked the beginning of a tremendous year for Ley Line. The band was invited back to Old Settler’s Music Festival and as a main stage act at the Kerrville Folk Festival. Meanwhile in Austin, they supported great acts like Austin’s own Superfónicos at Antone’s Night Club and Billy Strings at The Mohawk. In June, Ley Line performed alongside Bonnie Paine of Elephant Revival on the main stage at the Telluride Bluegrass Festival and later added to the Austin City Limits Music Festival lineup.