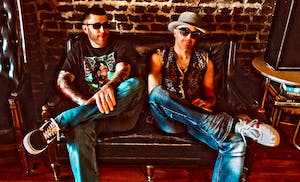 iCal
Google
BoomBox , the electronic work of songwriter, producer and multi-instrumentalist Zion Rock Godchaux, returns to The Grey Eagle on 10/24/19!

A little house, a little blues, a little funk, a little rock, and a whole lot of soul blast through BoomBox.

Since first emerging in 2004, founder, songwriter, producer, and multi-instrumentalist Zion Rock Godchaux has been quietly seasoning this simmering recipe to perfection. However, it reaches a boiling point on his forthcoming 2018 fifth album, Western Voodoo [Heart of Gold Records].

At the same time, the Muscle Shoals, AL native stays true to what attracted countless fans in the first place.

“I remain open to anything you would hear coming out of a boombox,” he explains. “There are a lot of different vibes and angles, but it still adheres to a universal rhythm. This new record is the most musical and varied, yet it’s tightly wound in respect to that syncopation. There are only a few rules. It should be heavy groove. It should make you want to move. Overall, I’ve further developed the sound people are used to.”

“You hear about different forms of magic around the world,” he goes on. “The West, in general, has its own voodoo influenced by the blues. That’s what shaped me as a musician growing up in this country. It’s hard to put in the words, but you know it when you hear it.”

You hear it in everything that BoomBox has done thus far. Over the course of four albums, the group has become a streaming favorite with numerous tracks cracking a million plays on Spotify. Moreover, they’ve made audiences groove everywhere from Electric Forest and Hangout Music Festival to High Sierra Music Festival and Red Rocks.

In the end, the new music kicks off the brightest and boldest chapter yet for Godchaux. “Our best side is somewhat medicinal,” he leaves off. “All of the rhythms, melodies, and frequencies add up to these healing properties. I hope people feel rejuvenated and re-focused on some level when they hear us. That’s Western Voodoo.”

In the spring of 2019 Zion enlisted his “brother from the same mother” Kinsman MacKay to embark on BoomBox’s most exciting configuration to date. “There’s a special kind of chemistry between two brothers playing music together,” Zion explains. “Since 2003 we’d get together and make tracks just for fun, and realized we had a strong connection in the studio.” The two always knew they would work on a project together someday, and when the doors opened up logistically in 2019, it was the natural move for the brothers to take form as BoomBox.

BomBassic (Asheville, NC) is the musical collaboration of Brucey B and Cpt. HyperDrive focused on creating sound full of emotion and energy. Raised on the raw sound of NY hip-hop, and groomed in Asheville’s eclectic electronic music scene, they exhibit a wide range of influences. From funk, classical, jazz to glitch-hop, house, and future bass, every resonating genre is explored. With Brucey B on the keys and HyperDrive controlling a custom DJ-FX rack, their high-energy live performance adds an incredibly soulful dimension to their sound. BomBassic’s music is always growing, in different directions, looking for new ways to connect with the listener.

Originally from Long Island, New York, now based in Asheville, North Carolina, Cpt. HyperDrive and Brucey B met in high school and became friends on their shared love for hip hop and music in general. Brucey formed a local hip hop group, IRD, and a few years later HyperDrive asked to join. Welcomed into the group, Brucey B taught HyperDrive all of his production techniques and how to operate audio hardware. Their chemistry was evident and their skills kept progressing.

Passion for innovative music and introduction to new genres and artists inspired the two to form a new group. BomBassic was born in Spring 2011 in an effort to combine their experience of production along with the limitless boundaries of electronic music. Since then they have formed a deep catalog of soul moving material that continues to evolve in style and sound.