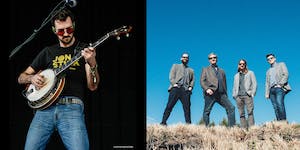 iCal
Google
The Greenliners celebrate the release of their new album with a hometown show at The Grey Eagle in Asheville NC with The Kyle Tuttle Band!

International Banjo Champion Kyle Tuttle is shredding his way through the jamgrass scene. Since moving to Nashville in 2012 Kyle has shared the stage with many epic performers, most notably as a member of the Jeff Austin Band for 3 years. Kyle has also worked closely with Jamgrass legends Larry Keel, Travelin’ McCourys, Leftover Salmon, Greensky Bluegrass, Billy Strings, and Railroad Earth. In addition to being seen around the jamgrass circuit, Kyle is a studio musician in Nashville, and recently produced the Chain Station album ‘Backroads’.

A few words from Jeff Austin about Kyle: “He’s one of a kind, I’m telling you. If there’s a better banjo player then show them to me. It’s a rare gift when somebody can connect theoretical musical depth, like knowing what phrasing you’re using, or what key you’re in, or what variation on the chord you’re using with, fucking balls of fucking steel. To just be able to dig in like he does and play his ass off, it’s amazing.”

Kyle’s debut album ‘Bobcat’ was released in 2016. Pete Wernick of Hot Rize says about the record, “Precious few banjo players have both solid mastery of traditional Scruggs style and also the impulse and ability to make eclectic excursions using high-challenge techniques. On Bobcat, that combination creates a likeable “anything might happen” feeling that pulls the listener in. Kyle’s tone and execution are clean and attractive, and help sell his musical choices to the listener. In all, Bobcat is a welcome debut, introducing us to a banjo player who deserves our attention.”

The Greenliners are a progressive bluegrass band from Asheville, NC featuring Richard Barrett on acoustic guitar, Jay Franck (of Sanctum Sully) on mandolin, Ben Saylor (of Brushfire Stankgrass) on banjo, and Christian Ferri on bass.

They will release their debut EP, "Never Looking Back" on May 30, 2020. Recorded over several sessions in 2019 at Indidog Studios with producer and dobro-extraordinaire Billy Cardine, "Never Looking Back" features six original songs that showcase the band's unique songwriting, instrumental dexterity, and rich vocal harmonies.