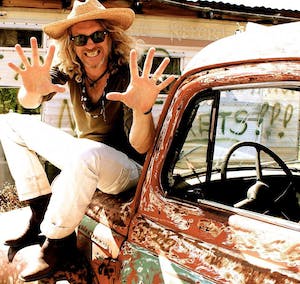 presented by The Grey Eagle and Worthwhile Sounds

No one back home in Mississippi was really that surprised when, one night, they saw Jimbo appear in a monkey mask on national television. Friends and family weren’t shocked to see him leaping like a madman possessed, throwing $100 bills at David Letterman on Late Night. This was in 1998, the dregs of the 20th century. Jimbo was performing with his bizarre brainchild, Squirrel Nut Zippers who, quite accidentally, became America’s darlings and were riding high on a runaway hit single “Hell”.

No, they had noticed something odd about Jimbo early on. “He could do things other children couldn’t do,” says a close family friend. “He seemed always focused on some distant horizon, obsessed over a private thought no one else could fathom.”

He was haunted by ghosts from the nearby civil war battlefield… the bloodbath that was Shiloh. “I was fascinated by ancient things and the arcane,” Mathus , 47, states. “I saw visions… I could see and feel the Earth plummeting through the solar system and it, in turn grinding along, clock-like. I saw and heard time being sucked into the gaping maw of infinity. It’s taken me all these years to even figure out what it all meant. I always felt both frightened and comforted by these childhood episodes. The next thing I remember I woke up… and there was music!”

His father was a wild-ass banjo player, horse trader, and small town attorney, descended from Scottish fiddlers and singers. A profusion of alcohol-fueled music and all night singing surrounded the young Mathus. At age six he joined the ranks of adult musicians and joined the family band as mandolinist. “As a small child,” Mathus explains, “I was sort of self contained…very adult. I was allowed to wander the back streets of Jackson or hillbilly towns in Arkansas you know, just alone with my mandolin absorbing songs. I never had any trouble just sitting in with and learning from the musicians I found there. It was weird because adults always told me their problems. They would like, confide in me…ask my advise…like I knew the answers?”

Mathus began creating his own original music. His first composition was entitled “Chokin’ on a ‘Lude”. “I spontaneously helped create a high school noise rock band called Johnny Vomit and the Dry Heaves”, Jimbo says. “My home town was Pentecostal Church-infested, you know, a conservative southern hillbilly town. Old men sat on the courthouse steps whittling, shit like that. Needless to say the band and song didn’t go over well in my area. I was asked to leave high school for generally being too subversive. They mailed me my diploma and said PLEASE GO!”

Various subsequent mishaps and minor fuck-ups led to his being incarcerated and sent to the Mississippi River to work as a deckhand. “I was basically an indentured servant to a barge company outta New Orleans,” Mathus relates about his formative years. “I had to perform extreme physical labor in the most brutal conditions, alongside and toe-to-toe with these bad men… you know, big motherfuckers! But it was interesting because all these bad men would kinda pull me aside and spill their guts to me. Men would seek my advice on shit with their old ladies or whatever. Grown women would inquire about their deceased father or grandmother…they thought I was some kinda fortune teller.”

Having set his sights on the life of a wayward jounrneyman, Mathus continued his wanderings and learnings, finally settling in North Carolina in the early 90’s. Immersing himself in the cultural and artistic oasis that was Chapel Hill, he immediately started assembling the troops that would become, a few years later, the Squirrel Nut Zippers.

“It was a step by step thing putting that band together,” Mathus says. “I already had the background on the deep south musical styles… black, white and creole. In Chapel Hill I was able to use the libraries, the record stores,bookstores, original music clubs, all that shit I had never seen before,I was able to do the kind of research I’d always dreamed of. I went back to the roots of American art and music. I found the Harry Smithanthology. I educated myself.”

The demise of the Squirrel Nut Zippers in 2000 was only the beginning for Mathus. He’d already begun a solo career with the 1997 release of his, JAS. MATHUS PLAYS SONGS FOR ROSETTA, an effort to raise money for his ailing Aunt Rosetta, daughter of Charley Patton. He’d already had a huge role as guitarist and “spark plug” for the mind-bending record that is Buddy Guy’s SWEET TEA and had recorded it’s follow up… the Grammy winning BLUES SINGER. He had begun a tutelage under Memphis producer/shaman Jim Dickinson.

“I was ready and encouraged by great men to take on the full southern musical landscape and forge it into my own cannon of songs…to dig deep inside myself and to look and listen hard at what I found there.”

BLUE HEALER is the name of Mathus’s latest and by far greatest record out on Fat Possum. The date is April 21, 2015. It is his eleventh effort under his own name and is once again produced by Bruce Watson at his Dial Back Sound in Water Valley Mississippi.

“It’s the story of a man in a southern landscape who is swept insanely apart by internal and external winds. He digs deeper and deeper into the very fabric of his reality, experiencing love and lust, despair, hope and sheer animal exhilaration on levels few ever do. He is tested in every way imaginable and achieves a sort of enlightenment… he gains power and understanding of life’s mysteries. Yet questions remain. He wonders if the struggle was worth it or even real. Maybe he just needs some love and affection? Is he madman or mystic? Con-man or honest council? Is this autobiographical or fictional? Only the BLUE HEALER knows the answer to the great cosmic HEEBIE JEEBIE!!!

For Low Flyin’ Planes, his seventh album, Klein teamed up once again with his longtime producer and engineer Bronson Tew at Dial Back Sound in Water Valley, Mississippi. “This feels like the final chapter in a trilogy of records I’ve made with Bronson,” Klein says, “although we’re already on to the next one together as well. He’s a close friend and a genius engineer and producer whose role in shaping the sounds and textures of these records and bringing my songs to life can’t be overstated.’You set them up; I’ll knock them down’, he’s said about our musical partnership. And it’s true- these albums are just as much his handiwork as they are mine.” The other two albums in this so-called trilogy include 2013’s Sky Blue DeVille and the 2015 release Archer’s Arrow. “To me, Low Flyin’ Planes is the sonic follow-up to Sky Blue DeVille. I think it’s a natural progression.” To that end, the record features sometime Wild Fires guitarist Crash Cason, former Wild Fire Tew on drums, guitar, and harmony vocals, and the sound is capably filled out with Matt Patton (Drive-By Truckers) and Stuart Cole (ex-Squirrel Nut Zippers) on bass, Eric Carlton (Jimbo Mathus) on keys, Kell Kellum (Young Valley) on pedal steel and guitars, Will McCarley (Fat Possum Records) on drums, Hank West (Squirrel Nut Zippers) on sax and trumpet, and other ace players from the Oxford, MS, scene. The result is a strong, sincere collection of folk rock songs featuring Klein’s signature warm vocals colored by a lush, textured sound.

Also a represented Atlanta-based actor, Klein’s roles have included Amazon’s “Z: The Beginning of Everything” as well as various commercials and indie film projects. He can be seen performing his unreleased song, “Goin’ Down to Peachtree”, in the award-winning independent film Born River Bye.

“Klein ranks in the upper tier of current Georgia-based folk-rock singer-songwriters… The array of musicians Klein assembled for the recordings, tracked in Mississippi with producer Bronson Tew, wrap each song in a comfortable shawl of sound, something occasionally akin to a soft-focus vision of early ’70s Byrds or Jackson Browne fronting Dire Straits.”- Jeff Clark, Stomp & Stammer