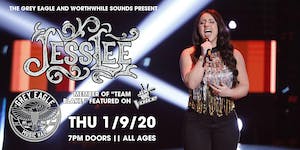 JessLee has been surrounded by music her entire life. Growing up in a modest home in rural Florida, she idolized her grandparents who were both touring musicians. Her first public appearances were around the age of nine when she started performing with Radio Disney. JessLee continued to develop herself as an artist throughout her young teenage years and found herself touring and playing shows all over the state of Florida. JessLee knew if she was going to make a greater impact in the music industry, she would need to start writing and performing her own material.

In 2014 JessLee started visiting Nashville and began writing with some of Nashville’s top writers, such as Clay Mills and Weston Davis. Shortly after JessLee hit the studio to record her first EP and began filming her music video for her song “Burn”.

The music video for “Burn” went viral and ended up in the hands of the producers from NBC’s The Voice. JessLee turned the chairs of both Kelly Clarkson and Blake Shelton, the latter of which she chose as her coach. On team Blake JessLee was on national television 5 times, and was praised by all the judges on the show and personally praised by Trace Adkins after working with him during her battle rounds.

With her new found momentum from The Voice, JessLee relocated to Nashville and found herself in the studio with 2 time Grammy nominated producer Brad Hill working on the beginnings of her forthcoming EP. “Over Him” is the first single off the yet to be named EP, and is a playful summer anthem sure to empower women to love themselves and not get caught up in unhealthy relationships. Since moving to town, JessLee has drawn some pretty strong comparisons with some even saying she is a modern day Shania Twain mixed with the vocal power of a young Christina Aguilera. JessLee has already toured extensively in the mid-west and and parts of the southern United States, and is looking forward to reaching nearly every state in late 2019 into 2020.