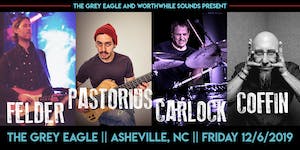 JEFF COFFIN is a globally recognized saxophonist, composer, educator, and is a member of the legendary U.S. rock group, Dave Matthews Band. You may also know him from his 14 years, and 3 Grammy Awards, with the genre-defying Bela Fleck & the Flecktones. Jeff fronts his own numerous groups when not touring with DMB and has released 15+ solo CD's on Ear Up Records.

Coffin is known for his passionate and fiery soloing, his melodically driven compositions, his deep involvement with music education, and his continued dedication to the improvisational musical art form some call Jazz. He is one of the top, in demand, saxophonists in the world as well as a first call studio musician in Nashville, Tennessee, where he has lived since 1991. Jeff is both a Yamaha & D'Addario Performing Artist and Clinician, teaches improvisation at the prestigious Vanderbilt University, authored The Saxophone Book, co-authored The Articulate Jazz Musician, and runs his own awesome record label, Ear Up Records.

Keith was recently voted number 1 Pop drummer, number 1 Fusion drummer, and number 1 Best All-Around drummer in Modern Drummer’s 2009 Readers Poll and would like to thank all that voted!

Keith’s first ever instructional DVD is now out with Hudson Music! It’s entitled “Keith Carlock- The Big Picture: Phrasing, Iimprovisation, Style, & Technique, and you should get your copy now!!!

Called “the next big jazz guitarist” by NPR, Nir Felder is a new voice in instrumental music. Equally adept across a wide range of genres, inspired by icons from John Coltrane to voodoo chile Jimi Hendrix, Felder has forged a unique and highly recognizable sound at a young age and quickly become one of New York City’s most highly sought after musicians as both a solo artist and as a sideman. He has performed with, among others, Chaka Khan, Diana Krall, John Mayer, Esperanza Spalding, Terri Lyne Carrington (with whom he recorded the Grammy-winning “Money Jungle”), Vijay Iyer, Jack DeJohnette, Meshell Ndegeocello, the New York City Opera, Dianne Reeves, Joe Lovano, Snarky Puppy, Bobby McFerrin and Lizz Wright, at venues including Radio City Music Hall and the Village Vanguard and on major national televised programs including the NBC Christmas Special. He is also a member of the new co-lead all-star band Band of Other Brothers (with Jeff Coffin, Jeff Babko, Will Lee and Keith Carlock). Seeking a more personal creative outlet, Felder first formed his own group in 2010, performing shows throughout the United States, Canada, Mexico, Europe and Asia. Felder’s critically acclaimed debut “Golden Age” (Sony/OKeh) has been called “absolutely beautiful” by The Seattle Post-Intelligencer, “lyrical and lofty” by The New York Times, “mesmerizing” by The Boston Globe, “a melodic triumph” by the New York City Jazz Record, and “mind-boggling” by All About Jazz. “If the hope, thought, depth and heart displayed on this recording are any indication, Felder sees his own golden age happening right now – and I wholeheartedly agree. A great recording.” – Downbeat Magazine Editor’s Pick. Felder’s next release is slated for 2017. The new album, tentatively titled “Interregnum”, seeks to build on the direction established with “Golden Age” – taking jazz music in a new direction for the 21st century.

Felix Pastorius is a rising young bass force poised to broaden the technical and musical conceptions of the instrument. The son of bass immortal Jaco Pastorius, Felix tried violin and piano before settling on bass guitar, at age 10, inspired by Flea, Les Claypool and Victor Wooten. Joining the band of Weather Report percussionist Bobby Thomas, Jr., at 15, Felix gained invaluable performance experience. Upon attending a Wooten Bass Camp at 19, Felix was recommended by Victor for the bass slot in Jeff Coffin’s Mu’tet. Three albums later, Felix had fleshed out his surging style on 5- and 6-string bass, leading to stints with Cindy Blackman and his own steady gig at the Zinc Bar in New York City. In late-2011, Felix auditioned for and landed the bass chair with Grammy-winning jazz mainstay, the Yellowjackets, at last providing an international platform for his forward-thinking fretboard work. Back at home in Brooklyn, Felix also pushes musical boundaries with his playing and writing in Hipster Assassins and Social Experiment. Bass Guru is excited to present Felix’s educational debut via his thought-provoking lesson packs. Felix has also recently been featured as a member of A$AP Rocky.