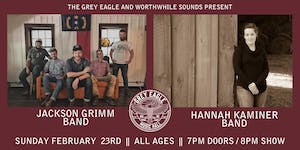 iCal
Google
Two local favorites - Jackson Grimm & Hannah Kaminer - will both be backed by their bands for this very special co-bill on February 23rd!

Jackson Grimm marries folk pop melodies with the lonesome sound of traditional Appalachian music. In a region with a strong music culture, it is no surprise that Grimm's songwriting is representative of his musical birthplace: Asheville, NC.

The Bull Moose Party was Grimm's backing band for his 2018 debut album which was hailed "..a basically perfect Americana album" (country.de) and contained "very appealing songs" (thenextgig.nl). The core of the band continues to play as The Jackson Grimm Band. While each of the band members demonstrate years of proficiency on their instruments, what sets this ensemble apart from the others are the vocal harmonies and the band dynamics. Audiences can tell when bands have been playing together for years and this group shows that 10-fold.

Hannah Kaminer is a folk/Americana artist based in Asheville, NC. Raised in small towns in western North Carolina, she fuses echoes of Appalachian traditions with wistful, Americana-style songwriting. Her clear, yearning voice and silvery melodies are a haunting pairing with honest lyrics about loss, love, and home.

Kaminer has won honors for her songwriting including the Brown Bag, Asheville's citywide songwriting competition, receiving a WNC Regional Artist Project Grant to help record her second album, and being named a finalist in the 2019 Chris Austin Songwriting Contest at Merlefest. She has released two albums, 2015's Acre by Acre and 2018's Heavy Magnolias, which was co-produced with the GRAMMY award-winning Julian Dreyer; both albums are available wherever you listen to music. She currently performs solo and with her full band around western North Carolina and the Southeast.