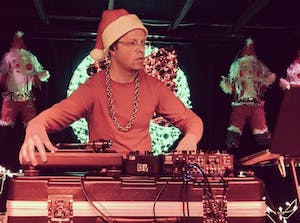 iCal
Google
The annual Holiday Liquor & Dance Party is back at The Grey Eagle in Asheville, NC. Get your tickets here!

Marley Carroll has a prismatic array of musical manifestations, and your impression can change based on which part of the spectrum you choose to view. As a singer and songwriter, he penned the eminently danceable indie hit “The Hunter.” As a DJ, he constructs expertly-mixed marathon sets that juxtapose vintage soul, disco and Afrobeat with modern house flourishes. Now, with his forthcoming record on Emancipator’s Loci imprint, Carroll has focused his attention on rhythm-forward instrumental electronica that is as meticulously-detailed as it is sublime. Taking its inspiration from the natural world, specifically flying and flocking creatures, Flight Patterns represents a new high watermark for the veteran producer.

Carroll’s humble origins as a classically-trained pianist and percussionist were shattered after he took top honors at a statewide DJ battle at the prodigious age of 17. The experience catapulted him into notoriety, pitting his skills against DJs twice his age and quickly catalyzed his path towards career musicianship. In the intervening years he has completed a transformation into a dynamic electronic music producer, world-class turntablist and captivating live performer.

As a producer, Carroll’s early experiments wove the stuttering precision of mid-era Warp (Boards of Canada, Autechre) with the gauzy emotional haze of shoegaze (My Bloody Valentine), culminating in the well-loved debut LP Melanaster. His follow-up, 2013’s Sings, revealed a more rhythmically-driven version of Carroll’s vision, influenced by the galvanic dance floor energy of larger live audiences. A densely-propulsive electronic journey rooted in shadowy forest imagery, Sings received universal critical acclaim, drawing praise from tastemakers like Pitchfork, Rolling Stone and Stereogum, and was honored with an album-of-the-week nod at Bandcamp.

Onstage, Carroll brings a more raw and improvisatory adaptation of his music to rapt audiences, combining live sampling, drum pads and looping with stunning and often unorthodox turntable skills. He has shared the stage with similarly-minded peers like Floating Points, Bonobo, and DJ Shadow and has appeared at groundbreaking music festivals across the country (Coachella, Decibel, Moogfest).

With Flight Patterns, Carroll has tuned his instruments skyward and infused his unique style of subtle and compelling dance music with samples and textures from the natural world. Bird songs, field recordings, gongs, deep basses, wooden drums and plaintive analog synths provide the substrate for expansive songs with the kind of three-dimensional depth that invites immersive, intentional listening.

“This all started with the crows,” he explains. “I work from a small home studio in the mountains surrounded on all sides by trees, and I began to feel this spooky intelligence all around me, like I was being watched. I became fascinated by their activities, their comings-and-goings, the little dramas that are playing out all around us, all the time. That led to an obsession with bird calls and communication and now it’s gotten to the point where I have a Cornell Ornithology Lab calendar hanging in my bedroom.”

Regarding his new label home, Carroll says: “Signing with Loci felt very natural. I’ve been touring partners and friends with Doug for a long time and he deserves a ton of credit for helping my music reach wider audiences. I’m immensely grateful for the opportunity and I hope it reaches fans of Loci that are open to something a little more uptempo.”

Pleasure Chest is a high energy Blues, Soul, Rock and Roll hailing from Asheville, NC. With the humor of Bo Diddley and Screamin' Jay Hawkins to the swampy, dirty grit of Slim Harpo and Elmore James they're guaranteed to please and get your bootie shaking!