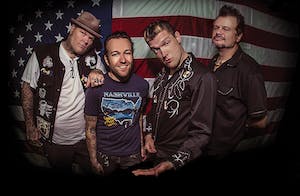 In a town known more for generating pop country ‘hat acts’ and contemporary Christian music, there is a storm brewing. Small independent bands with no management, booking, record labels (or even local media support) are changing the way people think about Nashville Tennessee.

Now they’ve got three full length CD’s under their belt. ‘Sucker Punched’, (Dec.2006), ‘Three Step Windup’ (April,2008) and ‘Hang Your Stockings….. Say Your Prayers’ the band’s Christmas CD (Nov, 2008). Each one totally DIY, produced and engineered by Firebaugh and Dickson and recorded in Andrew Dickson’s garage, lovingly known as ‘Studio D’. Each CD blends elements of honkytonk, rockabilly, psychobilly, and straight up rock and roll. Every member of the Hillbilly Casino brings their own special flavor to the band, from Nic’s background in hip hop and rockabilly, to Geoff’s love of old school punk rock and ska, and you’ll find elements of all of this in every Hillbilly Casino record and show. 2008 also saw the release of ‘Buy-in’ a full length Documentary by Doug Farrar at Rockstep Creative. Doug followed the band around for over a year, attending dozens of shows, and collecting performance, and interview footage, which he compiled into a revealing look at a band just trying to make a living and have fun.

While you’ll see a lot of bands sitting around waiting to get ‘signed’, the Hillbilly Casino took a cue from bands like Black Flag, Fugazi, and Youth Brigade, booking their own tours, and producing and releasing their own CD’s and T-shirts, and spending hundreds of hours in their old grey Econoline van getting the rock ‘n’ roll out to the people. From thirty minute opening slots, to 3 and 4 hour marathon sets, these boys are gonna bring their ‘A’ game, and you’ll probably get tired before they do.

The Hillbilly Casino has performed along with the following national Acts…

Members of the Hillbilly Casino are endorsed by King Doublebass, Gretsch Guitars, and Fender Amps.

Little Lesley & the Bloodshots light up the stage with their soulful twang and captivating songs. Hailing from New York City and South Carolina’s upstate, they’ve been making waves and making friends around the world with their honest approach to American Roots music.

Lesley Swift fronts the band, belting out her self-penned songs with gravel and grace. What started out as trio in Brooklyn in 2012 quickly became a fixture on the national Rockabilly scene. They played the first New England Shakeup (2013), were direct support for both Robert Gordon and Kim Lenz, independently released their debut full-length album "On Fire", and landed a spot on the Ink N Iron festival (2014) in Long Beach CA. Their third year was highlighted by a stand-out performance at the world’s biggest and most renowned rockabilly festival, Viva Las Vegas (2015), which garnered them an official place in the international rockabilly scene and attention from European booking agents and labels.

2016 marked their first tour abroad and their signing with the legendary Western Star Records of the UK. Alan Wilson recorded and produced their Doin’ Fine EP, which created quite a buzz and is still in regular rotation on BBC radio. Nick Westfall produced and directed the band’s first official video for title track “Doin’ Fine”, with over 20,000 views in the first 24 hours on Facebook. The band made their first appearance at the Nashville Boogie, the Hotrod Hayride (UK), and ended the summer playing to over 10,000 people on the main stage closing night of the Summer Jamboree festival in Senigalia, Italy. Lesley had moved from Brooklyn to Greenville SC and the band quickly became a fixture in the southeastern Kustom Kulture scene. In fall 2017, they returned to the UK to play the famous Hemsby Rock N Roll Weekender and record their second full length album with Alan Wilson, “Heartbeat”.

2018 launched the release of “Heartbeat” on Western Star Records, performances in Germany and Sweden, another STAND-OUT performance at Viva, and a lineup change. Lesley returned to her roots and is leading the band on rhythm guitar, trading upright bass duties with Greenville’s own Mark Dye. Veteran honky tonk drummer Brian Kennedy is keeping time, and Sean O’Shields lays down the sweet, lonesome pedal steel. Lesley is currently working on a new album and the music continues to evolve.

Anyone who is looking for some compelling, passionate roots music with a great stage show, Little Lesley & The Bloodshots are playing a town near you!