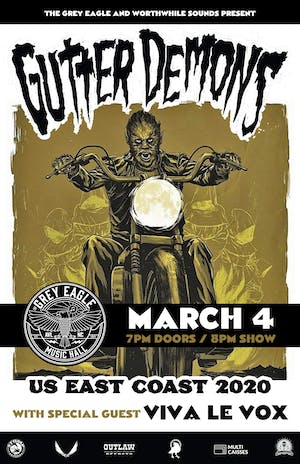 Since their unholy birth in 2001, Gutter Demons have been tearing up the scene across Canada, USA and Europe with their intense stage shows, raucous rock n' roll music, red-blooded Rockabilly roots, Punk and Heavy Metal potency and downright dirty musicianship.

Gutter Demons are, without a doubt, among the pioneers of the Canadian Psychobilly scene. This Montreal-based three-piece has been burning up stages and melting faces around the globe for nearly two decades with their infectious brand of high octane psycho rock n' roll. The band has paved the way for other great acts like The Creepshow, The Brains and Raygun Cowboys to create a strong, loyal and vibrant community across the country. They’ve shared the stage with The Misfits, Rancid, The Reverend Horton Heat, UK Subs, Vibrators, Leftover Crack, Nashville Pussy (among many others). They’ve appeared on international festivals like Psychobilly Meeting (Barcelona), Wreckers Ball (LA), Drop Dead Fest (NYC), Bedlam Fest (UK) and have appeared on countless compilations, seven inches, video game soundtracks and splits.

Now Gutter Demons are blasting back on the scene with their fifth and arguably best album to date. No God, No Ghost, No Saints is eleven tracks of ultra high-caliber, balls-to-the-wall, punked up psycho rock n’ roll. From the blazing opening track to the epic closing medley, the album takes the listener on a hellacious joyride through the eerie underside of life, death and everything in between. These hardworking road warriors take no prisoners. Each and every one of their songs are delivered with the raw spirit of rock n roll; combining a sexed up rockabilly strut with the unapologetic fist in the air and the manic mayhem of early metal. The Gutter Demons train is raging full steam ahead with North American tours lined up in fall 2018 and international tours to follow in 2019. No God, No Ghost, No Saints is your all-access ticket to the weirdly wild and undeniably dark world of the Gutter Demons.

“In these times of copies from copies, it’s refreshing to hear a band that dares to approach this rather limited genre in it’s own way and succeeding with flying colors.” – Wrecking Pit

“The Gutter Demons’ psycho sound is refreshing and deep but they play the horror cards in a subtle way. The Gutter Demons continue to take great pride in releasing rich & well written concept albums while avoiding the pitfalls of the generic “zombie, hotrod, pin-up” category.” – Bucket List

'If Tim Burton were to throw a surprise birthday party for The Devil at Fats Domino's house, Viva Le Vox would be the band in the living room.'

Viva Le Vox bubbled up out of the South Florida muck in 2008. Often found playing open mics and their local laundromat spreading their peculiar blend of punk rock, ragtime, and blues, their live performances soon gained enough attention to land them in the clubs. It wasn't long before they took their show state-wide. With their first full length release, Desperation Alley in 2009, they ventured out into the southeastern United States. In 2010 they released Wayward Ones and took on the rest of America, touring almost nonstop for the next two years with a short break to record Dirt For Sale with Joe Buck (Joe Buck Yourself, Hank III, Legendary Shack Shakers).

The band's lineup has embodied many forms since its inception, and at this point Tony teamed up with Joe on upright bass to continue spreading VLV's weirdness here in the states and make the jump across the pond to Europe. In 2014 the duo recorded Luv Hungry and made their second run to Europe and the UK in 2015. Upon their return, Tony reunited with original bassist Scarecrow Jenkins and convinced long time friend Johnny Tugboat to take up the drums, soon relocating the base of operations to North Carolina. The trio released The Fall Of Skivvy Starzo in 2016 and continue to blow asses off throughout the galaxy....