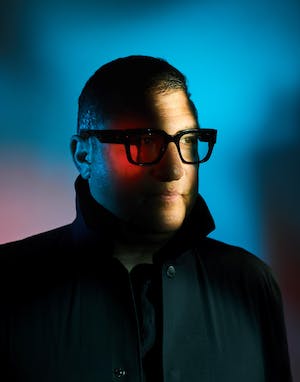 Without desire, most of the world’s problems would be solved and it would be a miserable place to live. For the last 30 years, Greg Dulli has been the poet laureate of the bizarre whims and cruel tangents of desire. A foremost authority on the sell-your-soul rewards of carnal lust, the high voltage epiphanies of chemical enhancement, and the serotonin lows left in their wake. The front man of the Afghan Whigs has long been on a first-name basis with his demons, most of whom eventually relented and let him pour them a shot. But then there are the known unknowns at the heart of our nature, the intractable difficulties of love and death, and the recurring human desire for survival and rebirth.

Therein lies Random Desire, the first solo album under Dulli’s own name, following canonized stints at the helm of The Afghan Whigs and The Twilight Singers. The title is a play on “random selection,” which refers to a process that researchers use to pick participants for a study. When using this method, every single member of a population has an “equal chance of being chosen as a subject.” Recontextualized, it allows us to realize the randomness of existence, the odd alchemy of emotions, chemistry, and circumstance that baffle us to no end. The reasons why artists write songs and why listeners need them. And even if the answers are evasive, that’s no excuse to quit searching.

Random Desire started in the aftermath of the last Whigs record, 2017’s In Spades, which Pitchfork named one of the best rock records of the year, hailing it as a “heavy, menacing work of indie rock majesty…thrilling and unsettling.” Drummer Patrick Keeler was about to take a short sabbatical to record and tour with his other band, The Raconteurs. Dulli’s longtime collaborator, bassist John Curley went back to school, and there was the tragic death of the band’s guitarist, Dave Rosser.

In response, Dulli returned to his teenage bedroom roots, finding musical inspiration via the model of one-man-band visionaries Prince and Todd Rundgren. The Los Angeles-by-way-of-Hamilton Ohio native wrote nearly every part of the record from piano lines to drums to bass riffs. As always, the music came first and the lyrics were completed later. Recording and writing way stations included his home in Silver Lake, the village of Crestline high up in mountains above San Bernardino, and New Orleans. But the bulk was finished amidst the arid beauty and stark isolation of Joshua Tree (at the studio of engineer Christopher Thorne. Dulli handled most instrumentation, but an all-star cast of characters appear across the track-listing including The Whigs’ guitarist Jon Skibic and multi-instrumentalist Rick G. Nelson, Mathias Schneeberger (Twilight Singers), pedal steel wizard, upright bassist, and physician Dr. Stephen Patt, and drummer Jon Theodore (Queens of the Stone Age, The Mars Volta).

If many of his grunge-era peers are tapped out or resting beneath, Dulli has proven that creativity can be infinite with a voodoo imagination that tilts towards constant revolution. A gris gris man in the vein of Bob Dylan, Neil Young, Nick Cave, or the dearly departed Purple One, Dulli’s never made the same album twice, shapeshifting through funk, soul, hip-hop, jazz, and bloody knuckled rock n’ roll without wandering too far from the essence of what defines his sound. But don’t expect your older brother’s Afghan Whigs. There are serrated guitar attacks, sure, but there are also threnodies built atop sepulchral piano lines, plaintive acoustic hymnals, goth-rock benders, Bedouin caravan raggas, and the occasional hip-hop 808s slap.

The bulk of Random Desire cohered in a six-month whirlwind last year. After writing songs for the previous 18 months, Dulli scrapped all but “A Ghost” and “Scorpio.” Into the void came a narcotic lovers lament like “Sempre,” which gathers dark strength from the fatalistic comfort of knowing that things might never get any easier. It’s a bittersweet kiss off to a lover, laughing at their cruelness with a knowing sneer. As a wise man once said, it’s that ether that makes your soul burn slow. There is “Pantomima,” the Spanish and Italian word for “pantomine,” rooted in the everyday deceptions of people who babble with borrowed words. It almost plays out like a Go Team! song, if the squad lost the game and consoled themselves by letting chaos engulf them. The tone is set from the sardonic taunts of the album’s first bars: desolation, come and get it.

“Marry Me” is a midnight of the soul number full of delicate guitar and moonlit ambience, a pedal steel sighing like a woeful regret in the distance -- the words full of ambiguous questions and recollected sin. “It Falls Apart” floats with aquatic translucency, introducing the album’s experimental second half and the gut-punch feeling that whatever romance was sparked will soon be extinguished. “Scorpio” boasts the de facto Prince nod with a middle portion borrowing the symbol’s pitched up Camille falsetto. While “Lockless” pays tribute to the creative benefits of loneliness, the shock that you still possess the ability to be surprised and the numbing revelation that your worst suspicions usually come true. “Slow Pan” is the slinking finale, the end credits with a Last Waltz grace. The screen fades out as a harp angelically hums (as the holy spirit of Dorothy Ashby would’ve intended).

Clocking in at a lean 37 minutes, Random Desire is a clinic put on by a veteran master operating at the height of his powers, offering evidence of the hard-fought and weary wisdom learned from setbacks and victories alike. A lucid, confident and self-assured document of the songs of experience, the perils of existence, and the possibilities that offer themselves anew with each breath. Another death and rebirth from an outlaw who has seen it all and somehow lived to tell.

Or the times when everything is basically working. Or when we get to lay in comfort with a partner watching Netflix and the world go by.

The interesting parts are when all those things break down and you’re left in isolation to finally deal with the roots of whatever had been thwarting your existence all along. The interesting parts are when the world has turned its back on you and you have turned your back on it or them. When darkness could seemingly swallow you whole if it hasn’t already. When there is no such thing as hope and so you manufacture it from a dream which only angle is to survive.

Come Back World is an album about rebirth and survival. At least that’s what it means to me. The title track I wrote in a little town on my way to aspen on a tour celebrating the 15th anniversary of Redemption’s Son. I was alone touring in a rented car driving myself across the country as a support act and doing what I could to rebuild my career. New management, eviction notices, an injured shoulder and most importantly estrangement from my family of origin. Discovering newly that my life and my soul had been ravaged for the most part covert forms of emotional abuse know. Commonly as NPD. The discovery of which is commonly followed by extreme isolation, PTSD, and the realization that nearly everything in your life needs to be built again.

I realize this is an intense way to start a bio about a new album but there really is no other way to paint the story of how this album came to be if I want it to be anything resembling the truth.

Because for me this album is all about surviving that predicament which for those unfamiliar with it will perhaps sound like madness (which it is ironically designed too) and for those that know about it and those that have survived it, will know that one can do little else but focus on the rebuilding, the bringing back of your world.

Herman Hesse said the best art comes from necessity and this art certainly qualifies. I had nothing but songs to get me out of the hole I was in.

The songs themselves aren’t all literal interpretations of what I was going through but the strength of them comes from the fact that I needed them to be good enough to deliver some kind of life back too me. A life I had lost that wasn’t gonna get found. But perhaps a new life could be built. A better one. One that wasn’t rooted in lies. – JA