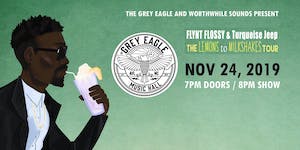 iCal
Google
Do You Like to Dance? Flynt Flossy & Turquoise Jeep return to The Grey Eagle in Asheville NC to Treat Us Like Pirates on Sunday November 24!

Besides being the rapper behind the viral hits "Did I Mention I Like to Dance" and "Treat Me Like a Pirate," Flynt Flossy is also head of the strange, fun, and mysterious Turquoise Jeep record label/collective. Flossy claims the TJ crew were born on the Internet and not based in any geographic location, but he does admit that he launched the label with R&B singer Whatchyamacallit. Flynt kicked things off in 2009 with an upload of his party rap song "Stretchy Pants," while the beginning of 2010 saw Whatchyamacallit and Flynt join TJ artist Yung Humma on his massive viral hit "Fried or Fertilized." That same year saw the trio come together for another viral Humma hit, "Lemme Smang It." Both tracks landed on that year's Turquoise Jeep compilation Keep the Jeep Ridin', which also featured Flynt's electro-dance number "Did I Mention I Like to Dance." Considered more Lonely Island than Odd Future at this point, Flossy and Humma "went legit" in late 2012 when they joined Childish Gambino for the single "F*ck Your Blog." A year later, Flynt would release another solo single, the party rap track "Treat Me Like a Pirate" ("and gimme that booty").

Bryan Colston made his musical debut in 2009 as a hip hop duo “Crazyhorse And Colston”. Together they created an award winning album, “Backroads and Bonfires”, as well as two award winning music videos. Since then Colston has released an all original solo album, as well as a mixtape, both of which were instant Asheville classics. He shows a lot of versatility with his deep lyrics matched with unique instrument driven hip hop beats. Colston has opened up for Mobb Deep, Nappy Roots, Rass Kass, Akil the MC, Black Milk, Rapper Big Pooh, Blackalicious, and many more notable artists. Currently, Colston is in studio preparing for his new release.

Originally from Chicago, IL, Fame Douglas is known for seamless blends of old school and hot new favorites! Featuring uptempo Hip-hop, R&B, House, Garage and Top 40 with underground cuts from up and coming artists from all regions in his sets which is what earned him a reputation as "The People's DJ".

Having opened for national acts such as Bubba Sparxxx and Nappy Roots, he's also one half of AVL DJ duo "NJSXP" (New Jack Swing Experience) alongside DJ E-Nasty.