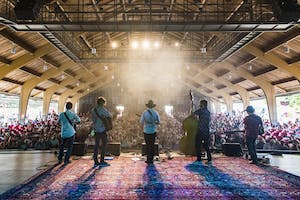 Quickly blazing a name for themselves with their progressive approach to American folk music, Fireside Collective delights listeners with memorable melodies and contemporary songwriting. Formed in the mountain city of Asheville North Carolina, the band plays original songs on stringed instruments, intended for a modern audience. Following the release of their debut album “Shadows and Dreams”, the band hit the road seeking to engage audiences with their energetic live show built on instrumental proficiency, colorful harmonies, and innovative musical arrangements.

Well what do you call it?

“Bluegrass, Newgrass, perhaps Progressive folk…” These are some descriptions mandolinist and songwriter Jesse Iaquinto chooses to identify with. “Depending on where you come from and your experience with folk music, you may think we’re very traditional, or on the other hand, consider us a progressive act. We appreciate both ends of the spectrum and may lie on a different end on any given night.” While roots music lies at the core of the Collective’s songs, a willingness to explore the boundaries and present relevant new material remains fundamental.

The band burst onto the scene in early 2014 following the release of “Shadows and Dreams.” The album weaves bluegrass, funk, rock, and blues influences into a refreshing representation of modern folk music. From the opening track “Poor Soul” with it’s energetic bluegrass overtones to the closer “Shine the Way Home”, the album takes listeners on a journey through simple love songs to complex themes such as metaphysics and coexistence. The album, recorded in Asheville at Sound Temple Studios, features guest musicians from Asheville’s rich acoustic music scene alongside members of the Fireside Collective.

2017 has been a momentous year for the band as they released their second studio album, “Life Between the Lines.” The album helped garner a nomination for an IBMA momentum award for best band. The band has been touring heavily to support the release of their new album with over 120 shows by the end of the summer. Fireside plans to continue touring throughout 2017 and hopes to release another album in the not so distant future. If you revel in the sounds of acoustic instrumentation, enjoy the excitement of energetic live performances, and delight in the creation of original songs, then follow the Fireside Collective as they journey on in their musical endeavors.

Praised by NPR for their “upbeat, poppy vibe; energetic, driving rhythms" and "virtuosic solos,” Twisted Pine has quickly become one of the most acclaimed young string bands in the Northeast. Audiences across the US and UK have been drawn to their forthright songwriting, lush harmonies, musical daring, and charismatic appeal.

Steeped in traditional music, these musicians are also fearless, tuneful improvisers and passionate lovers of pop. Fiddler Kathleen Parks' command of the vocal mic is as charming as it is gutsy. On her instrument, Parks is an insatiable risk-taker, seeking out exciting new musical territories. Mandolinist Dan Bui is a master of melody and drive, celebrated widely for his dexterous, tasteful picking. And bassist Chris Sartori holds down the low end and a lot more, introducing creative, funk-inflected cadences that never overwhelm the beat.

But while it’s easy to celebrate each of the band members individually, Twisted Pine is more than a collection of talented musicians - it’s a unit that grooves together. Their intricate arrangements of swelling, syncopated rhythm and precise instrumental interplay bring the enveloping sound and hooks of indie pop to an acoustic instrumental setting.

You’ll find Twisted Pine on stages large and small, entertaining festivals of thousands and intimate rooms alike. Winners of the 2018 Boston Music Award's Americana Artist of the Year and selected as one of Improper Bostonian's 2018 "Top 10 Local Acts on the Rise," Twisted Pine has played major events from Grey Fox to DelFest to Glasgow’s Celtic Connections and beyond. “They absolutely rule their musical world with humor and relish,” says legendary fiddler Darol Anger.

Twisted Pine released its debut, self-titled album of original music in 2017, followed in 2018 by Dreams, an EP of “wildly innovative covers… full of spark, light, and irresistible force” according to PopMatters. Check out Twisted Pine on tour and see why the Boston Globe calls them “a wider version of stringband, boundary jumpers akin to outfits like Punch Brothers, Nickel Creek, and Crooked Still.”