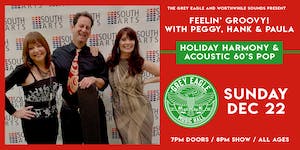 Hank Bones is a real cool cat. He’s managed to stay off the radar of the internet, and yet you can find prowlin’ around any night of the week, slingin’ his guitar, swingin’ and meowin’ in 3 party harmonies with a plethora of Asheville’s finest in Gypsy Jazz, Swing, Oldies & Oddities! The only way you can reach him is through his “land” line and yet he’s the most sought after dude in town! He’s best known for his weekly stint, solo guitar and vocals, at the Lobster Trap, which started when they opened and continues today. His affiliation with band leader and drummer, Russ Wilson, proves his prowess from solo to big band configurations! First call studio musician and affable fella, he’s an Asheville treasure and an integral member of the Asheville music since its rise in the 90’s.

For nearly three decades, Paula Hanke’s interpretation of cover music has been a tour de force. From Atlantic City and Las Vegas to TV's Star Search, from Tokyo, Japan and the high seas, to Germany, Saudi Arabia and Bermuda, she’s one evolutionary, world class performer. Since her move from NY to Asheville, NC in 2006, Paula has self-produced sell-out concerts including “Torch Singer: A Tribute Linda Ronstadt,” with Peggy Ratusz, “Billie Holiday and Lester Young: A Musical Romance” and “A Night of Brazilian Jazz” featuring the music of Antonio Carlos Jobim. In 2016, she co-produced “Etta James, Muse of the Blues” with Peggy Ratusz. NPR theme-song writer, BJ Leiderman hired Paula as a featured vocalist in his band and on his 2017 original CD release called “BJ.” In 2012, she unveiled her original CD, “The Only Voice” with an explosive release concert backed by the internationally renowned, local world-beat favorites, Free Planet Radio. www.paulahanke.com www.loveisaroselive.com

Peggy Ratusz has been pulling from the cream of the Asheville music crop since moving here in 2002 from Austin, Texas. This “ruby throated” chanteuse has been a finalist in the prestigious Memphis TN based, International Blues Challenge 2008, 2010 and 2016. Newly inducted into the Asheville Music Hall of Fame, Peggy has won “best in Blues” for five years straight and in 2016, won “Best Vocalist” as well as “Artist Who Gives Back.” Peggy and her band, The Daddy LongLegs have opened for The Tedeschi-Trucks Band and the Beach Boys. In 2015, she partnered with renowned entertainer and fellow song interpreter, Paula Hanke to form Women Who Made Music History Concerts, LLC. Peggy and Paula collaborate to offer a variety of concerts and educational programs that shine a light on women in music history who have paved the way. For the past 14 years, Peggy’s column, Women Making Music, has appeared in local magazines, WNC Woman and SOFIA. www.reverbnation.com/peggyratusz www.loveisaroselive.com