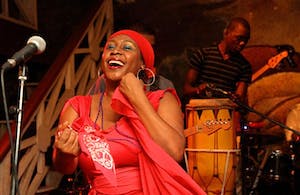 RAM is a legendary band based in Port-au-Prince, Haiti, who first made the world scene in 1993 with Ibo Lele (Dreams Come True), a song with both English and Kreyòl lyrics, that was included in the soundtrack for the major motion picture Philadelphia. RAM has released 7 albums, including Aïbobo.

Though the band usually performs in Haiti, they have performed at the New Orleans Jazz Festival, the Cannes Film Festival, the Edinburgh Fringe Festival, the Roskilde Festival, as well as the Summer Series at Central Park in New York City.