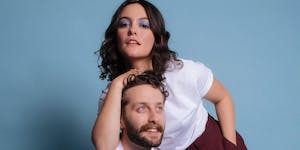 iCal
Google
After headlining the first annual RadFest, Diet Cig returns to The Grey Eagle stage in Asheville NC on June 3rd for an ALL AGES show!

It’s very strange (“Or not strange at all! Hi!” says feminism) that most of the music we funnel into little girls’ ears——even music written by former little girls——is about how women are petty, pretty garbage whose only valuable function is to hold perfectly still in men’s boudoirs and wait for intercourse. “I wanted to make songs that were the opposite of ‘Genie in A Bottle’ or ‘The Boy Is Mine,’” Sadie Dupuis says of Slugger, her new solo album under the name Sad13. “Songs that put affirmative consent at the heart of the subject matter and emphasize friendship among women and try to deescalate the toxic jealousy and ownership that are often centered in romantic pop songs.” What!? Songs for women that actually champion women’s autonomy, reflect women’s desires, listen to women when they talk, and let women be funny and normal and cool, like women actually are? - Lindy West

Thin Lips, huh? A rock/roll type indie band who place a whole lot of value on humility, kindness, and erudite riffage. Following their fledgling EP, Divorce Year, with the release of their first full-length record, Riff Hard (Kyle Pulley/ the Headroom, May 2016), Chrissy Tashjian steers Thin Lips down the middle lane of pop sensibility, while simultaneously testing the boundaries of some pretty wild licks, bud; backed by rhythm keepers Michael Tashjian (drums and Chrissy's younger brother), and Kyle Pulley (bass/audio engineer), and auxiliary guitar player, Christopher M. Diehm. 2017 finds the band looking ahead to a European tour and split record release with friends, Modern Baseball and the Superweaks, as well as pre-production for a forthcoming full-length record.