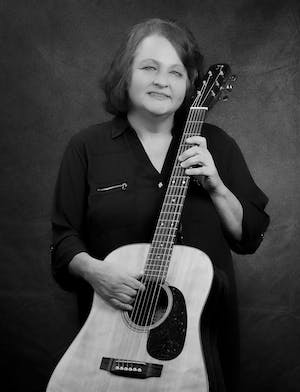 Raised in the coal fields of Appalachia, life for Dale Ann Bradley was much like her musical heroes from the same area in the southern mountains. No running water or "safe" electricity was available until she was a senior in high school. "One light socket and an extension cord kept a 1950's "Philco" refrigerator, box fan, and radio going. Looking back now I know how dangerous that was."

"Tar paper will keep the roof from leaking and soup beans taste the best on a coal stove." Along with living in an extremely rural atmosphere, there were heavy religious restrictions as well. "Primitive Baptist" was the church denomination where her father was, and still is a minister and pastor. He also worked in construction and is a retired coal miner.

No musical instruments were permitted in any service, and in the churches in the mountains, no musical staff would be found. They sang from a little hymnal called The Globle. Singing that was, and still is, very similar to Ralph Stanley's acappella spirituals. Television was very limited as well. Someone gave the family an old black and white TV. An aluminum antenna was the only way to obtain reception. "We would pick up PBS and occasionally the Knoxville, Tennessee TV stations, depending on the elements." It's during this time that she was mesmerized by The Porter Wagoner Show. "That was entertainment," Dale says.

Due to lack of accessibility and religious restrictions, it was nearly impossible to get recorded music to listen to. A great uncle who had left Kentucky and did well in Detroit bought her an 8-track tape player as well as tapes from her favorite entertainers. She was around fourteen when she received her first guitar. "It was a little plywood, small body guitar, but it had six strings and I made a pick from a milk jug. Drove everybody crazy."

It was her junior year in high school when a new band director came to her school. He was a childhood friend of her mother and grew up on Williams Branch, the small community where Dale Ann, her mother, and grandmother were raised. "He was so talented and I wanted to learn everything." The band director Mearl Risner, and his late wife Alpha, sang weekly during the summers at Pine Mountain State Park in Pineville, Ky. They invited Dale Ann to perform with them and this band configuration became the "Backporch Grass."

This band would allow her to start her musical journey. They obtained regular regional gigs, recorded a couple of 45 singles and she had the opportunity to get in front of an audience. In the early '80s, "Backporch Grass" got into the finals of "Marlboro Country Music Round Up" held in Lexington. Most of the acts were country bands so it was really special that a bluegrass band from southeastern Kentucky would end up in the last round. The prize was an opening spot at Rupp Arena for Ricky Skaggs, Hank Jr. and Ronnie Millsap. Though their bluegrass band did not win, Dale Ann met an all- female bluegrass band that would play a big part in her career, "The New Coon Creek Girls."

After marrying, moving to Jacksonville, Florida, and giving birth to her son, Dale Ann returned to Kentucky. She hadn't performed in a couple years. Knowing that she really craved making music, she called on former "Backporch Grass" bandmate and friend Harold McGeorge to assist her in starting her career again. They began writing and making trips to Nashville to knock on doors. On the way back home from one of these trips, they made a stop at Kentucky's famous Renfro Valley. She dropped off a demo there and received a call before she got home that day asking if she could perform that coming Friday night on The Barn Dance. She was invited to stay and entered into an extensive contract with the entertainment center.

While at Renfro Valley, she performed on all shows and recorded on The Sunday Morning Gatherin', which still remains the second oldest radio show in America next to The Grand Ole Opry. Dale Ann also recorded two solo albums during her tenure at Renfro Valley. "I can't put a price on all I learned at Renfro Valley," Dale Ann says. She joined "The New Coon Creek Girls" while at the Valley and performed with them until 1997. She recorded four albums on Pinecastle Records with the band.

Pinecastle then offered her a solo deal. Sonny Osborne would be producing and she had always been a huge Osborne Brothers fan. Her first release, "East Kentucky Morning," propelled her into international media and airplay. She charted on Billboard, Gavin and International Bluegrass charts, was featured in Billboard magazine and dozens of major industry publications. The Grand Ole Opry opened its doors for Dale Ann to guest several times as a result of this project. Her second release, "Old Southern Porches," garnered more of the same accolades. "I was getting album reviews that I couldn't read," she laughs, "They were from all over the world." The third Pinecastle release was a gospel album, "Songs of Praise and Glory," which also shined especially in the Gospel market.

Dale Ann then moved to Doobie Shea Records where she recorded "Cumberland River Dreams" and "Send the Angels Down." Both of these projects were co-produced by Tim Austin and Dan Tyminski. Having a stellar cast of musicians as well as incredible vocalists such as Allison Krauss and Dan Tyminski guesting on the project was a dream come true.

Garnering international attention, venues were opening up in places Dale Ann had never dreamed, including two tours in Japan, two in Ireland, Canada, cruise ships and all over the United States.The Opry was offering her many guest spots as well. "It takes my breath every time I walk out there. I know it always will." After the folding of Doobie Shea Records, Dale Ann found herself thinking about her future recording home.

Dale Ann had a wish that she would be able to work with "banjo wizard" Alison Brown. She had been watching Brown's Compass Records for a while and knew they were on the cutting edge. She felt she could grow there and was thrilled when Brown felt the same and agreed to produce. The first Compass release, "Catch Tomorrow," set Dale Ann in a whole new sonic and visual world. The album was reviewed by even more in-depth publications such as The Washington Post, The Wall Street Journal, Chicago Tribune, The Tennessean, and numerous others.

The second Compass Records release "Don't Turn Your Back" kept the train rolling for her. In 2011, she recorded her third release with Alison Brown. This album included "Country Songbird" Pam Tillis. Dale Ann, along with Pam Tillis, penned the title cut, "Somewhere South Of Crazy," and in 2011 the song was a nominee for Song of the Year and Album of the Year. In 2011-2012, the IBMA bestowed the Female Vocalist of the Year to her for the fifth time.

Dale Ann has since returned to make music with Pinecastle Records and received several more IBMA as well as SPBGMA nominations for Female Vocalist of the Year. Early one morning in 2016, the bluegrass musician from the “Bluegrass State” of Kentucky Dale Ann Bradley started getting text messages of congratulations. Having asked a friend what the congratulations were for, she sipped her coffee just as the reply of her Grammy nomination came through. She spewed her coffee all over herself and then burst into tears. The tears were of joy and excitement over the nomination instead of the hot coffee that may have burned her or ruined her outfit.The Grammy Nomination was for her project "Pocket Full of Keys."

"Pocket Full of Keys" marked the first self-produced project of Dale Ann’s lengthy career. That magical formula is replicated for Dale Ann Bradley and replicated quite successfully. Dale Ann strives to keep encouraging messages in her songs and continues to as she says, “tell the story the story of the people as well as her own,” however, “Every production is a new one.” As evidenced on this new project, it seems that in the case of Dale Ann’s role as producer, practice makes perfect.

In 2017, Bradley released her self-titled album on Pinecastle Records. Two years after her highly praised Grammy nominated project “Pocket Full of Keys” was released, Dale Ann came back with a follow-up project. Since she felt there really wasn’t one song that depicted the entirety of the album, she decided this would be her way of saying “Hi” to her many current as well as future listeners. After listening to Dale Ann Bradley, one is struck by the overwhelming nod to days past. Nostalgic lyrics to songs with memorable tunes make this an immediate favorite. One of the tracks also included a first-time collaboration with Country legend Vince Gill on “I’ll Just Go Away.”

In 2019, Dale Ann was on the verge of another release. She calls her release “The Hard Way” on Pinecastle Records, "the album I've always wanted to make." Recorded at Bonfire Studio (the home of Pinecastle Records), she once again took original of beloved classic tunes from various genres and delivered another must-have album for your collection.

Also in 2019, Bluegrass music saw the rise of all-female group Sister Sadie. Formed after what was supposed to be a ‘one night only’ show at the legendary Station Inn, located in Nashville, the group has continued their growth. Throughout 2019, they were nominated for a GRAMMY in the "Best Bluegrass Album" for their critically-acclaimed album “Sister Sadie II” while making their debut on the legendary Grand Ole Opry, and also winning the IBMA award for "Vocal Group of the Year." The IBMA recognition marked the first time ever that an all-female group has won in this category.

Dale Ann has always expressed in her recordings the boundlessness of Bluegrass music and its musicians and vocalists by incorporating songs from all styles into her shows and albums. "Bluegrass can go anywhere, do anything, rip your heart out and make you laugh." The songs are true and full of passion. The artists love it like their families, which in reality is where all the emotion comes from. The roots of this tree are strong and the branches are blooming. Through all the ups and downs, happy and sad times, Dale Ann has always had a song. No one has handed her anything. She has garnered international success doing the kind of music she loves.

As time goes by, Dale Ann shows no signs of slowing down anytime soon. Her most recent 2020 project involves a collaborative album with Sister Sadie bandmate Tina Adair on “Oh Darlin’” released on Pinecastle Records. The collection includes full-length stripped down duet recordings from start-to-finish. As the reigning 2020 SPBGMA Female Vocalist of the Year winner, the Kentucky native has no signs of slowing down anytime soon. Fans can catch her on the road performing solo shows, along with select shows with her Sister Sadie bandmates.