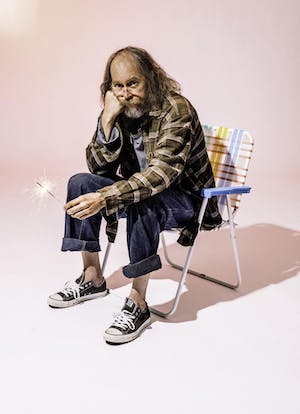 CHARLIE PARR is the eponymous new album by the Minnesota-based folk blues artist the same name. The album is a collection of new songs and new studio versions of classics/audience favorites from throughout Parr’s career and will be released September 27 on Red House Records. Recorded at Pachyderm Studio in Canon Falls, MN, CHARLIE PARR features Charlie’s trademark resonator guitar and 12-string with co-producer Liz Draper on bass, longtime collaborator Mikkel Beckmen on percussion, Jeff Mitchell on electric guitar, accordion, organ, backing vocals, and Dave Hundrieser on harmonica. The album is an honest and raw recording of Parr reflecting on himself and his career up to this point. It’s a musical reckoning that came after a freak accident less than a year ago that forced him to relearn how to play guitar, causing him to take stock of the songs he’s written over his lifetime. CHARLIE PARR is a stunning folk record that will surely stand the test of time, just like the man himself.

The accident on August 3, 2018 could have put an end to Parr’s career. Only a month earlier he had made his first appearance at the Newport Folk Festival, bookending a summer year of touring and career highpoints. Then, while skateboarding with his daughter along Lake Superior, he hit pavement. His right shoulder was busted into pieces and his ability to play guitar on stage again was suddenly in question. But, when playing the guitar is intertwined with who you are, not playing really isn’t an option.

He underwent surgery that left him with a metal plate and eight pins holding his reconstructed shoulder together. Within days, as soon as he could tabletop his guitar across his lap, Parr was playing again. Three weeks later he made a pain-filled return to the stage with an appearance on the Live from Big Top Chautauqua radio show.

“It’s the defining thing in my life,” Parr says. “When you think about yourself, you think, ‘That’s what I am. I’m the guy that plays guitar.’ So what happens when that gets stripped out? If there’s any way you can keep doing it, you’re going to keep on.”

But not everything returned to the way it was; his outlook had been altered.

“I’m not really that interested in careerism,” Parr says. “Part of the effect of the accident was a reaffirming of what’s really important to me. That’s not a music career, it’s just making music. That’s what counts the most — having pure motives and loving intention.”

By the time Parr hit the road again, he was reinvigorated to play music in a way he had not been for some time. He started digging out songs from early in his career.

“I can revisit any of them I want and meditate on what it was like to be seven years old again, curious about the guitar, obsessed with music and hoarding bike parts,” he says. “I can relive all the joyful times I had with my friends and family. I can grieve all over again my Dad’s passing; I can feel my stomach turn at the mountains of regret that I’ve amassed and the people I’ve hurt when I’ve been too self-absorbed to take better care of my actions, but I can’t change it.

“Songs are a different kind of history though, they’re not subject to the rules of time, they never died and they never will, and they grow and evolve right along with the rest of me.”

Parr had never really stopped playing those songs completely and, along the way, they had matured along with him. He wanted a chance to record them again to capture what they had become.

“I recorded some of those songs almost 20 years ago and, when I think about what my mind was like at that time, it’s not what it is now,” he explains. “In a way, I’ve been re-writing them over and over again for the past two decades.”

“Cheap Wine” is a new recording of a longtime audience favorite, a sinister narrative sung from the point of view of a liquor store owner with a dark secret who’s starting to crack. The plotline came from an idea for a novel that Parr eventually abandoned and mined for song ideas,

“John is a true cipher in my mind, a living embodiment of the folk process,” Parr says. “This song has been one of my favorite songs ever since I first heard it.”

“On Stealing a Sailboat” is a new song, a “cautionary tale about choosing your friends wisely,” he deadpans.

By 2019, Parr is back on his grueling international tour schedule, mended and reinvigorated, covering the entire country alone in his car, occasionally cooking his vegan meals on his car manifold. It’s a lonely existence that leaves a lot of time for reflection and reminiscing. Charlie Parr is the first album -- and there are 13 others -- that Parr he felt like putting his name on. It’s a bit of the new, a bit of the old, and a bit of what’s motivated and moved him. Most importantly, it’s an audio tour of his life and career to date and a celebration of more songs and stories to come.

Aaron Woody Wood’s Story Is One Steeped In Music And Tradition. Woody Is Straight Up Appalachian Soul Music. Carved From A Piece Of The NC Foothills Rock And Rolled Through The Mississippi Delta Mud, He’s A Cosmic Cowboy Who Represents The Powerful Soul And Energy Of American Music.

Beginning All The Way Back In Love Valley, In The Piedmont Foothills Of North Carolina Where The Famous Fiddler’s Grove Was Held, Woody Was Brought Up In A Family Full Of Musicians And Musical Talent. As Long As He Could Remember There Was Music Surrounding His Life. Woody’s Father, AL Wood, Was An Important Figure In Contemporary Bluegrass Music Throughout The 60’S And 70’S Helping Define That Genre Of Music Alongside Bands Like ‘Seldom Scene’ And ‘Country Gentlemen’. AL Wood Was Well Respected For His Songwriting, Tenor Singing And Banjo Playing, Putting Out Records When Bluegrass Was Just Beginning To Get Popular. Playing At The Grand Ole Opry Three Times And Performing At The White House Were Among Some Of The Great Achievements Of AL Wood’s Career. Woody’s Mom Influenced Him Through Encouraging Him To Listen To Her Collection Of Rock N Roll Records Turning Him On To Artists Like Chuck Berry, Little Richard And Rockabilly Music.

Being The Youngest Of 5 Kids, All Of Whom Played Instruments Or Sang, Woody Was Immersed In Music And Tradition From A Very Young And Formative Time In His Life. His First Memory Of Being On Stage Was At The Young Age Of 6 Where He Played A Tiny Banjo His Dad Had Made For Him. He Played And Sang Next To His Dad And Bill Monroe That Day. Between The Old Time Bluegrass His Father And Brothers Played And The Piedmont Blues That He Was Drawn To In His Teenage Years, His Musical Styles And Influences Were Taking Shape Through His Guitar Playing And Songwriting.

At 20, Aaron Woody Wood Moved To The Asheville, NC Mountains And Soon Began Busking On The Downtown Streets With What Would End Up Becoming The Members Of The Rag N Roll Swing Style Ragtime Music Of The Blue Rags - And Would Be The Start Of Woody’s Musical Career As An Artist. When Woody Was 23 The Band Was Signed To Sub Pop Records And Began Touring, Eventually Recording 2 CD's And Playing In 47 States Across The Country And Abroad Over The Following 5 Years Before Disbanding. Along The Tours They Opened Up For Some Of The Greatest Like Alabama, Leon Russell, Southern Culture On The Skids, Santana, Pavement, And Ziggy Marley In Places Like The Oregon Country Fair, High Sierra Fest, City Stages In Birmingham, Al And SummerFest In Milwaukee. Woody Was Featured In Acoustic Guitar Player Magazine In April Of 1998 For The Work That Was Being Released During These Years.

Over The Next 10 Years Aaron Woody Wood Had Many Successes As A Solo Artist And Began Various Bands In Asheville Like The Sufi Brothers, Custard Pie, And Hollywood Red, Opening Up For Mountain And Kenny Wayne Shepard. In 2006 He Was Featured On The CMT Television Show Big Break, Where He Beat Out Over 400 Local Asheville Musicians To Open For Country Superstar Sara Evans. The Show Aired Numerous Times On The Network. Woody Spent Those Years All Over The Country Doing Club Shows And Festivals Like Bonaroo And The New Orleans Jazz And Heritage Festival.

New Orleans Has Always Been Like A Second Home To Woody. While Spending Time In The Big Easy He Recorded 2 Albums And Performed Regularly With The Blue Brass Project, A Blend Of Traditional New Orleans Jazz And Bluegrass Music. The Blue Brass Sessions Features Big Chief Monk Boudreaux, Woody, Members Of The Dirty Dozen Brass Band, Rebirth Brass Band, Larry Keel, And Trombone Shorty. He Performed In New Orleans At Voodoo Fest And JazzFest In 2011 And 2012 With The Mardi Gras Indian Funk Band, The 101 Runners.

Over The Past Few Years Woody Has Been Doing Studio Work And Opening Up For Acts Like Brad Paisley, Buddy Guy, Jamey Johnson, Kellie Pickler, David Holt And Tony Joe White. He Sang On The Avett Brothers 2013 Release Magpie And The Dandelion And Plays At The Annual XMas Jam In Asheville, NC Every Year.

His Newest Release Was Recorded At Fleetwood Shack Studios In Nashville Tennessee Where He Joined Some Of His Bandmates From The Blue Rags. "Sunshine" Features Woody On Guitar And Vocals, Bill Reynolds As Producer And Bass Player And Mike Rhodes On Drums. It Features Micky Raphael (Willie Nelson) On Harmonica, Jimmy Wallace ( Joe Walsh) On Organ - And Was Mastered By Rob Frabone (Keith Richards, Bob Dylan, Eric Clapton, Bob Marley).

Woody Continues To Focus On His Songwriting And Fresh Styles Of Guitar Picking While Collaborating On New Creative Projects.