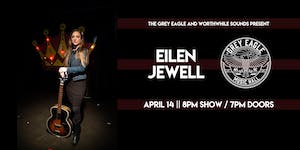 American Songwriter describes Eilen Jewell as "one of America's most intriguing, creative and idiosyncratic voices." The Boise, Idaho songwriter is one of a kind.

That singular voice springs forth from a woman of more than one mind, and she taps into many of them on Gypsy (August, 2019 Signature Sounds Recordings). By turns personal and political, pissed off and blissed out, Jewell's first album of original material since 2015 expands brief moments of joy into lifetimes, and distills epic sentiments and persistent doubts into succinct songs.

Jewell seamlessly blends heavy electric guitars and dirty fiddles on the rollicking country rocker "Crawl" with the sweet and understated horn section of the tender "Witness. "79 Cents (The Meow Song)" skewers sexism and discrimination with pointed humor over a circus bed of musical saw and horns.

Longtime fans who love Eilen Jewell in classic country mode will delight in the pedal steel driven "These Blues" and the sole cover on Gypsy, "You Cared Enough To Lie," written by fellow Idahoan and country legend Pinto Bennett.

Rather than pulling artist and listener this way and that, the tensions within and between these twelve tracks propel Eilen Jewell's eighth studio album forward as a remarkably cohesive full-length.

Steve Fulton is a singer/songwriter from Boise, Idaho who performs under the stage name, SFM - Steve Fulton Music. He has performed all over the country for the last 20 years touring with his band and as a solo artist. His musical persona includes full band funky-rock-reggae and stripped down Americana.

Though more than a decade has passed since Fulton's last release "Said & Heard," he's hardly been dormant; rather, Fulton has spent that time working on hundreds of records for other artists, helping build Visual Arts Collective and expand his Audio Lab recording studio, in addition to producing live music events around the northwest. In his spare time, he amassed 40 original songs. The resulting double album showcases his two sides; full-band funky rock/reggae on one half and stripped-down Americana on the other. A single-LP vinyl version of "Eponym" will be released in early 2017.

As well as being a singer-songwriter, Steve is also a producer and recording engineer. He is a household name in his hometown of Boise, where he also owns and operates one of the state's finest recording studios; The Audio Lab. Fulton also served as singer and guitarist in the group House of Hoi Polloi, which has recorded five albums and toured extensively throughout the Northwest. Thirteen years ago he began a solo endeavor. Fulton first performed his solo material live when he opened for Tori Amos in front of 3,000 people at the Idaho Center. Since then, he has released three solo CDs on his Uncommon Records label, 'Shock Remission', 'Said & Heard', released in 2005 and now 'Eponym'. Fulton has shared the stage with acclaimed artists Michael Franti, Jewel, Shaun Colvin, John Hiatt, Mindy Smith, Tori Amos, Jefferson Starship, Blue Oyster Cult and the Wallflowers.

Fulton is also passionate about making his community a better place. In addition to performing for a variety of benefit concerts over the years, he serves as mentor to a wide array of local musicians and engineers, provides job-shadowing opportunities and internships, and gets involved in many projects with youths.