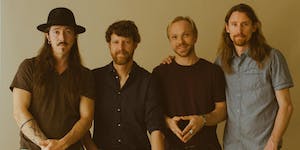 iCal
Google
Local favorties Brushfire Stankgrass return with an album release show at The Grey Eagle in Asheville NC on May 24!

Brushfire Stankgrass rises again. A bona fide Asheville classic, Brushfire is a genre-bending, Moog-powered, ongoing exploration of modern mountain music. With the love and support of a vibrant community of local musicians and creators, brothers Will and Ben Saylor, accompanied by Micah Thomas and Daniel Iannucci, continue to reinvent themselves and their distinctive, jam-infused, synth-laden, bluegrass sound. The band has a lot to share in 2020, starting with a double album release show at the Grey Eagle on May 24.

The older of those two albums, “The Rich Cache” is just that, a collection of buried tunes that the band has performed on stages great and small for over a decade, and finally, lovingly, self produced into a full length album. Featuring fan favorites like “Parker Padgett Blackout” and “Appalachian Snow” the album evokes a true sense of the group’s history and evolution, and is a celebration of some of their most unique and lasting creations. From traditional acoustic mastery to deep space synth vibes, their entire range is on full display.

Tracked in 2018 at Echo Mountain Studios, “City of a Thousand Hills” is the culmination of countless hours of practice and collaboration, consternation and celebration. It is a rueful love letter to their mountain home, as well as a fervent call to action, continuing the band's urgent message of preservation and conservancy in “Pretty Ass Blue Ridge Mountain Shit” that began with 2013’s “Microclimates.” With contributions from much loved local talents like James Schlender, Lyndsay Pruett and Drew Matulich, and the engineering mastery of Julian Dreyer at Echo Mountain, the album represents the group’s greatest achievement to date, both creatively and technologically.

The band will begin releasing singles from "City of a Thousand Hills" in March, and already has videos from some of the tracks available on their youtube page.