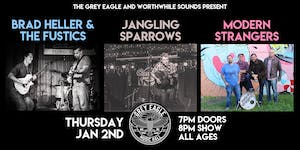 iCal
Google
Start the new year off right in Asheville NC with Brad Heller & The Fustics, Jangling Sparrows, and The Modern Strangers at Grey Eagle.

“…the sound of Heller and company is hard to pin down…A natural storyteller…complete with mellow acoustic rhythms and cutting electric riffs…likens his songwriting to that of Kentucky’s Chris Knight.” – Charleston City Paper

“They make honest to god rock and roll…at times sounding like The Jayhawks or even bigger bands like The Wallflowers…dramatic in the same way Van Morrison or Led Zeppelin can be in their quietest moment.” – Southeast Performer

“…taking the legacy of Redheaded Stranger, Nebraska, Blood on the Tracks, and Son Volt’s Trace in their own hands and hearts.” – Grayson Currin, Independent Weekly

Veteran of some of the biggest Philadelphia tickets of the day, Paul has shared bills with Scott Miller and Mic Harrison both of the V-Roys, Robert Earl Kean, James McMurtry, Drive-by Truckers, Neko Case, Big Sandy, Langhorne Slim, Patty Larkin, The Sadies, Cordero, The Bottle Rockets and Grayson Capps among many others so far.

Jangling Sparrows have coined the term "zydefolk" in describing their sound. While firmly planted in roots rock and songwriting, the band often flirts with 2nd line, shuffles and zydeco feels.

Modern Strangers is an Asheville-based rock band playing fun, high-energy, dance-friendly Melodic Rock/Jangle Pop music! A 4-piece combo of journeyman musicians, they take their varied influences and form them into a Jangle Pop juggernaut. They often draw comparisons to REM, Elvis Costello, Violent Femmes and The Kinks. Catchy songs, vocal harmonies and just the right amount of edge make these guys a fun night whether they're playing originals or quirky covers. Don’t forget your dancing shoes!