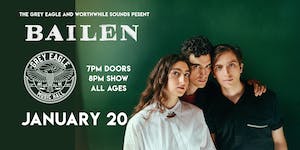 BAILEN’s gorgeous harmonies, striking arrangements and evocative songwriting springs from a very deep well. Growing up in NYC, the siblings, David, Daniel (twins!) and Julia Bailen were raised by their professional orchestral musician parents, and the young trio immersed themselves in a record collection that included Simon & Garfunkel, Joni Mitchell, Carole King and The Band. Their amazing three-part harmonies have been compared to The Staves and Fleet Foxes, however, on their debut album, Thrilled To Be Here, BAILEN have created something all their own. Produced by GRAMMY-Award winner John Congleton (St. Vincent, Manchester Orchestra, The War on Drugs), BAILEN’s shiny gleam and meticulous songcraft combine with the group’s unusual self-awareness, musicality and bite.

Named one of Sofar Sounds’ Artists to Watch in 2018, BAILEN has toured or collaborated with The Lone Bellow, Amos Lee and Joseph, among many others. Modern, melodic and soulful, BAILEN is twisting pop music in new directions, an undeniable, and welcome new arrival.

It really feels like coloring outside of the lines. For as much as the music of Old Sea Brigade remains rooted in Americana, indie, country, rock, and ambient soundscapes, it blurs and breaks barriers, tossing and turning between analog cinematic flourishes and provocative lyricism based on hard-won wisdom. Amidst this mélange of textures, Atlanta-born and Nashville-based singer, songwriter, and multi-instrumentalist Ben Cramer allows the emotion to resound loudest on his full-length debut, Ode To A Friend [Nettwerk].

“I put myself into my own bubble,” he explains. “The music doesn’t conform to one style. I’m in Nashville, but this isn’t straight ahead Americana or country. At the same time, it’s not just indie rock either. I chose to do something that felt like me. It’s the best representation of my songwriting and what I grew up loving about music. I hope you can pull your own meaning from it.”

He’s been encouraging audiences to do just that since first emerging in 2015. After the breakup of his last band, he wound up back in Atlanta at his parents’ house with “no idea what to do.” So, he figured it out.

The artist combed through his personal sonic archives, found inspiration, and started feverishly writing. Soon after, he teamed up with producer Jeremy Griffith to record Old Sea Brigade’s self-titled debut EP. The single “Love Brought Weight” caught fire, generating over 16 million Spotify streams. In the meantime, he inked a deal with NETTWERK after founder Terry McBride personally reached out on Facebook.

Between touring alongside Joseph, Luke Sital Singh, Lewis Watson, Julien Baker, John Paul White, and more, he released 2017’s Cover My Own EP. The lead single “Tidal Wave” quickly crossed the two-million-mark on Spotify as acclaim came from Clash, Indie Obsessive, Immersive Atlanta, and many others. During 2017, he retreated to Griffith’s Destin, FL studio in order to record what would become Ode To A Friend. In the studio, the sonic palette expanded to incorporate analog synths and a “squeaky, old, and out-of-tune piano that you’d never find in a music store—but gave the sound character.”

“This go-around, I brought in a lot of production ideas, since I’d been working with many artists in Nashville,” he explains. “I worked closely with Jeremy to bring the production to life. We went outside of the box and tried different things. That messed-up piano became a big theme of the record.”

On the lead single “Hope,” creaky ambience underscores the finger-picked acoustic guitar as he croons ponderous lines a la the opening admission, “I want to feel hope when I die, so I know what I left behind.”

He recalls, “I wrote that in Laurel Canyon at a friend’s house. That was first experience writing in L.A. like that. It wrote itself pretty quickly. It takes a while for me to figure out what a song is about. It was being really honest though. That’s how I’d describe it.”

“Feel You” sways between a steady beat offset by his gravelly delivery and sparse, off-time piano chords. “It takes on multiple meanings,” he reveals. “It could be like a bad relationship, or it could be something else, depending on your experience.”

“Seen A Ghost” hypnotizes with its airy guitars and ethereal production as “Cigarette” lights up embers of delicate picking and resounding vocals. Barely over two minutes, the title track and closer “Ode To A Friend” leaves a lasting impression that’s both heartfelt and heartbreaking with a vocal mid-section that practically levitates on the energy of raw feeling.

“When I started Old Sea Brigade, the time that followed was the best two years of my life,” he goes on. “I could tour and work on music full-time. In the middle of all that happening, one of my best friends actually committed suicide. It’s a heavy record in that respect. I came up with the lyrics right after he passed. I didn’t want a normal structure. It’s almost like an interlude to tie up the album dedicated to him. He was always such a big proponent and fan of my songs. He encouraged me to move towards a solo career. The title made sense. I finally felt vulnerable enough to put out music that was close to me.”

That’s why it’s so easy to get close to Old Sea Brigade. Cramer opens the floodgates emotionally and forges an unbreakable connection by simply being himself.

“I’d love for someone who is listening to feel like this is different and new, but also realize the vulnerability of the music,” he leaves off. “That’s definitely something I’ve struggled with in the past. This record is my leap of faith to express music in the truest way I can. I want to keep doing that.”