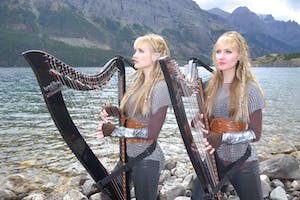 have achieved extraordinary success by taking Electric Harps and Concert

Grand Harps to unprecedented levels and smashing boundaries between

different genres of music. The duo has amassed over 1.5 million fans across

videos, making Camille and Kennerly the most followed and recognizable harp

duo in the world. Mixing their virtuoso harp skills with their stunningly complex

arrangements of rock, metal, and soundtrack hits - as well as Celtic Nordic

“Intrepid musicians. If you live long enough, you get to hear this (Harp Twins’)

"Rather than turn their attention to obvious, classically grounded territory, The

Harp Twins have made a name for themselves covering the likes of Iron Maiden,

in words would be futile. Such is the case with electric harpists, and identical