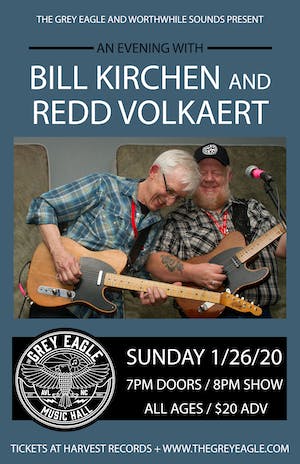 iCal
Google
Two master shredders of the Telecaster return to The Grey Eagle stage for an evening of guitar & song mastery...and plenty of laughs.

Two heavyweight guitar slingers and singers find a common ground with their deep history in Honky Tonk and Rock’n’Roll and their command of the electric guitar.

After spending 20 years as one of Austin, TX's most sought after guitarists, Redd Volkeart recently relocated to Galax, VA. Redd spent many years as the lead guitarist for the mighty Merle Haggard, and has played and recorded with a who’s who of greats, from Dale Watson to Brad Paisley to Billy Gibbons. He won a Grammy in 2009 for Best Instrumental.

Bill Kirchen is a founding father of Commander Cody, and his diesel-fueled licks drove Hot Rod Lincoln into the Top 10 nationwide. He has played and recorded with Elvis Costello, Emmylou Harris, Linda Ronstadt, Nick Lowe and Link Wray.