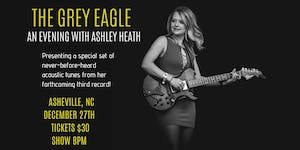 An Evening With Ashley Heath

iCal
Google
Ashley Heath debuts songs from her forthcoming release, and each ticket purchase comes with a vinyl copy of "Where Hope Never Dies."

For one night only, Ashley Heath will forego her full band arrangements and present a special set of never-before-heard acoustic tunes from her forthcoming third record. The intimate evening will allow listeners to hear the new tracks in their rawest form before they make way for the studio, and provide them an opportunity to play a first-hand role in the making of the new album. Each ticket comes with a vinyl copy of Ashley Heath & Her Heathens' record "Where Hope Never Dies," and sales from the evening will be used to fund the upcoming studio expenses.

With a voice often described as "velvet soul," Asheville songwriter Ashley Heath has been winning over the hearts of Americana music lovers since she gave up her barista apron in the spring of 2015. Currently on tour in support of her sophomore album "Where Hope Never Dies," Heath continues to deliver her signature blend of sultry blues and anthemic rock n' roll arrangements to clubs and festivals nationwide, most recently appearing at acclaimed events including Merlefest, Bonnaroo, Shakori Hills, and more and supporting the likes of Donna The Buffalo, Del McCoury Band, Anders Osborne, Shamarr Allen (of Galactic), and other staples on the scene. Often compared to music influences Bonnie Raitt, Grace Potter, and Susan Tedeschi, Heath still manages to find a voice all her own, and has been recognized across Appalachia for her strong songwriting and vocal abilities, having made the WNCW Top 100 list and Mountain Xpress "Best Of" awards several years in a row. On the heels of a jam-packed year touring throughout the American southeast and northern Europe, and with her band "The Heathens" in tow, Ashley Heath aims to bring her message of hope and resilience to listeners everywhere and show by example that all it takes to achieve your dreams is the belief that you are capable.