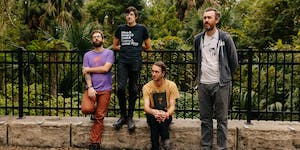 iCal
Google
AJJ returns to The Grey Eagle in Asheville NC on the heels of their latest release, "Good Luck Everybody," with Emperor X and Tacocat.

And indeed, Good Luck Everybody (January 17, 2020), the Arizona band’s seventh album, stands out in their already diverse catalog. While still rooted in the folk-punk sound AJJ has become known for, the album is unafraid to delve into new territories that test the limits of what the band is capable of.

“I think it explores some of the weirder sides of AJJ, the more experimental leanings that we’ve had in the past,” says bassist Ben Gallaty. Good Luck Everybody draws from a wealth of sonic inspirations, from Laurel Canyon folk-rock of the 60s and 70s to avant garde artists like Suicide, as well as some orchestral pop. There is even a piano ballad, the tragic “No Justice, No Peace, No Hope.”

Lyrically, Good Luck Everybody is a change of pace from the idiosyncratic songwriting style Bonnette has honed over more than 15 years fronting AJJ. It still features his wonderfully weird turns of phrase and oddball word pairings, but this time, his thematic lens is more directly focused on the inescapable atrocities of the world around him. Longtime fans will recognize the album’s social commentary as a return to their 2011 release, Knife Man, but this time it’s fueled by a more radical urgency.

“I usually try for a timeless effect in songwriting, so that you can hear a song and generally not think about the context under which it was written,” says Bonnette. “But for this one, I was trying to write, and all the bad political shit just kept invading my brain and preventing me from writing that way. So I decided to fully embrace it and exorcise that demon.”

Much like Woody Guthrie and Phil Ochs pulled their songs straight from newspaper headlines, Good Luck Everybody feels like a long scroll through social media feeds on a particularly volatile day.

The song “Mega Guillotine 2020,” for example, came directly from Twitter. It was influenced by Twitter funnyperson @leyawn’s popular tweet depicting a mockup of a French Revolution-style guillotine with one blade and enough headrests for 15 Congress members. Bonnette says the idea inspired him to press record and start playing, and when he did, the entire song came out of his brain fully formed. The final version also features backing vocals by Kimya Dawson.

Later, on “Psychic Warfare,” Bonnette takes out some aggression on the man at the root of it all, albeit through his trademark polite aggression: “For all the pussies you grab and the children you lock up in prison, for all the rights you roll back and your constant stream of racism / For all the poison you drip in my ear, for all your ugly American fear, I wrote you this beautiful song called ‘Psychic Warfare.’”

After years of partnering with Asian Man Records and SideOneDummy Records, AJJ is releasing Good Luck Everybody on their own, via their new label AJJ unlimited LTD, with Specialist Subject Records handling the European release. Bonnette and Gallaty also produced the record themselves and, in addition to their usual cast of collaborators (Preston Bryant, Dylan Cook, Mark Glick, Owen Evans), it features guest appearances from Thor Harris, Jeff Rosenstock, and Laura Stevenson.

“One thing that makes me rather giddy is that without a label or a producer, our listeners will have no one to blame besides us for the way our sound has changed,” laughs Bonnette.

For all of its dark leanings and its pessimistic reflections on modern culture, AJJ hopes that fans will ultimately come out of the album in a hopeful place. By its final track, “A Big Day for Grimley,” it feels like AJJ is holding the listener’s hand, staring at the looming apocalypse ahead, and whispering a message into their ear: Good luck, everybody.

When Seattle band Tacocat—vocalist Emily Nokes, bassist Bree McKenna, guitarist Eric Randall, and drummer Lelah Maupin—first started in 2007, the world they were responding to was vastly different from the current Seattle scene of diverse voices they’ve helped foster. It was a world of house shows, booking DIY tours on MySpace, and writing funny, deliriously catchy feminist pop-punk songs when feminism was the quickest way to alienate yourself from the then-en vogue garage-rock bros. Their lyrical honesty, humor, and hit-making sensibilities have built the band a fiercely devoted fanbase over the years, one that has followed them from basements to dive bars to sold-out shows at the Showbox. Every step along the way has been a seamless progression—from silly songs about Tonya Harding and psychic cats to calling out catcallers and poking fun at entitled weekend-warrior tech jerks on their last two records on Hardly Art, 2014’s NVM and 2016’s Lost Time.

This Mess is a Place, Tacocat’s fourth full-length and first on Sub Pop, finds the band waking up the morning after the 2016 election and figuring out how to respond to a new reality where evil isn’t hiding under the surface at all—it’s front and center, with new tragedies and civil rights assaults filling up the scroll of the newsfeed every day. “What a time to be barely alive,” laments “Crystal Ball,” a gem that examines the more intimate side of responding emotionally to the news cycle. How do you keep fighting when all you want to do is stay in bed all day? “Stupid computer stupor/Oh my kingdom for some better ads,” Nokes sings, throwing in some classic Tacocat snark, “Truth spread so thin/It stops existing.”.

Despite current realities being depressing enough to make anyone want to crawl under the covers and sleep for a thousand years, Tacocat are doing what they’ve always done so well: mingling brightness, energy, and hope with political critique. This Mess is a Place is charged with a hopefulness that stands in stark contrast to music that celebrates apathy, despair, and numbness. Tacocat feels it all and cares, a lot, whether they’re singing odes to the magical connections we feel with our pets (“Little Friend”), imagining what a better earth might look like (“New World”), or trying to find humor in a wholly unfunny world (“The Joke of Life”).

Throughout the album, Tacocat questions power structures and the way we interact with them, recalling the feminist sci-fi of Ursula K. Le Guin in pop-music form. “Rose-Colored Sky” examines the privilege of people who have been able to skate through life without ever experiencing systemic disadvantage: “For all the years spent/Hot lava shaping me/For all the arguments/I wonder who else would I be?” Nokes sings. “If I wasn’t on the battleground/I bet I could’ve gone to space by now.” “Hologram” reminds us to step outside ourselves and try to see beyond imaginary structures that trap us: “Just close your eyes and think about the Milky Way/Just remember if you can, power is a hologram.”

The record is full of beautiful details, finding plastic beaded curtains catching light amidst feelings of despair. This Mess is A Place explores politics with more nuance than the topical songs of Tacocat’s past, inviting listeners in for more complicated exchanges and leaving space for introspection. “Grains of Salt” finds the band at the best they’ve ever sounded: Maupin’s spirited drums, McKenna’s bouncy walking bass, Randall’s catchy guitar and Nokes’ soaring melody combine to create a bonafide roller-rink hit that reminds us that it just takes some time, we’re in the middle of the ride, and to live for what matters to you. It’s a delightfully cathartic moment and the cornerstone of the record when they exclaim: “Don’t forget to remember who the fuck you are!”

Producer Erik Blood (who also produced Lost Time) brings the band into their full pop potential but still preserves what makes Tacocat so special: they’re four friends who met as young punks and have grown together into a truly collaborative band. Says Nokes: “We can examine some hard stuff, make fun of some evil stuff, feel some soft feelings, feel some rage feelings, feel some bitter-ass feelings, sift through memories, feel wavy-existential, and still go get a banana daiquiri at the end.”

A former chemistry teacher, math tutor, and physics graduate student, Matheny left the academic world and spent the past decade traveling on buses and bullet trains across North America and Europe to perform several hundred concerts in venues ranging from a symphony hall in Portugal to the basement of a garden supply shop in Pittsburgh to a record shop/venue in the shadow of the Old City in Jerusalem. He's shared the stage with luminaries like Laura Stevenson, Sebadoh, Nada Surf, Thurston Moore, Sun Kil Moon, Casiotone for the Painfully Alone, The Hotelier, The Hold Steady, Jeffrey Lewis, and John Vanderslice.

"Wasted on the Senate Floor" is the first single from Oversleepers International, the eighth Emperor X full-length album, slated for release on Tiny Engines in early 2017. Though the song has long been a staple of live Emperor X shows, Matheny felt a growing urgency to record and release the song properly after watching with alarm as the U.S. presidential election campaign of 2016 descended into mass delusion and nihilism. "This song has always been about -- to the extent any song I write is about anything -- what it's like to live and love in a world where hegemonic media, late capitalism, and manufactured pseudo-consent destroy democracy. Seems like a good time to release it, doesn't it?"

Matheny lives in Berlin, where he helps operate Donau115, a small venue central to the Neukölln neighborhood's booming experimental jazz scene, and volunteers as a music technology instructor for a German NGO focused on supporting young refugees. His reputation as a producer, composer, and sound artist is also growing: an Emperor X song was featured prominently in the 2014 Warner Bros. film Veronica Mars. In 2011 and 2012, a collaborative sound installation work with art photographer Joel Sternfeld appeared throughout Europe in a travelling retrospective exhibition sponsored by Museum Folkswang. He co-produced the Sub Pop album Bits by jangle punk mainstays Oxford Collapse alongside Eric Topalski of Don Caballero. He has also been commissioned to compose video soundtrack music for labor unions and non-profit organizations including Planned Parenthood and SEIU. In addition to his label home of Tiny Engines, he has worked with several American and international labels including Bar/None Records, Burnt Toast Vinyl, Plan-It-X Records, the German/American label The Bomber Jacket and the Portuguese/German/Lithuanian multimedia collective Mouca.