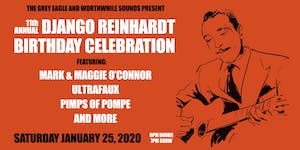 Mark and Maggie O'Connor, Ultrafaux, Pimps of Pompe, and more

Mark and Maggie O’Connor - American Classics identifies the cornerstones of repertoire, style and wonderful diversity of A New American School of String Playing. Mining a huge body of repertoire that has made its impact on American music, the selected tunes and arrangements by Mr. O'Connor represent stylistic importance, pedagogical value and have timeless appeal. The program offers a broad and interconnecting collection of American music through violin/fiddle solos and duos, with additional music by Mr. O'Connor on guitar. Audiences will find themselves inspired by the songbook of America as they have never heard it before.

Ultrafaux, led by acclaimed composer and guitarist Michael Joseph Harris, performs original music inspired by traditional Balkan and Sinti music, French Musette, Funk, Jazz Manouche, Blues, be-bop, and Western swing. They have been featured at top festivals all over the world including Festival Django Reinhardt in France, Midwest Gypsy Swingfest, Django-a-Gogo, Django By The Sea, Djangoary, Carrboro Django Jazzfest, Django Birthday Festival, and Charm City Django Jazzfest. Ultrafaux songs “Latcho Dromo” and “Signs of Struggle” were featured on Django Festival a compilation of the finest Gypsy Jazz in the world produced by Jon Larsen in Oslo. Ultrafaux was the first Gypsy Jazz band to be featured at the popular Charm City Bluegrass Festival. Their new album Tangent set for release in March 2020 crosses barriers between many musical genres and styles while remaining rooted in the Gypsy Jazz tradition. Ultrafaux received a scholarship to attend Folk Alliance International in New Orleans in January 2020 and they will be touring the UK, Canada, and Europe as a larger ensemble that same year.

“One of the most talented Baltimore musicians out there.” - Marc Shapiro, Baltimore Style Magazine

"We sometimes forget that jazz was first and foremost a people's music meant for dancing and socializing. One evening with Ultrafaux demonstrates why jazz has been so irresistible to listeners all over the world." - Ken Avis, Baltimore Jazz Alliance

“Ultrafaux breathes new life into jazz, while holding onto the sense of nostalgia that makes this genre so timeless and appealing in the first place.” -- Sam Sessa, WTMD

“These musicians can handle the complexities and breakneck speeds of Roma swing, but what makes Ultrafaux really special is that they play original music.” - Tom Cole, WPFW & NPR

"Ultrafaux brings the swinging manouche style bang up to-to-date. The all instrumental album is true to the roots of Gypsy jazz, employing many of the trademark elements...including virtuoso guitars and liquid, swinging bass lines.” - Ken Avis, Baltimore Jazz Alliance

“You all gave the best performance hands down that we’ve ever have had at Napa Valley Jazz Society. Our folks are still buzzing about your show!” - Bill Hart, NVJS

If you've ever listened to hip hop and thought, “Boy, this could use a bouncy melody, and perhaps some exciting instrumental improvisation” — or, if you’ve ever bumped gypsy jazz on subs, waiting for the beat to drop, The Pimps of Pompe got you. Leading the band on mandolin with equal parts swag and sophistication, frontwoman Cynthia adapts 90s and 2000s rap and R&B hits to a string band jazz format, providing fresh takes on familiar favorites.

Gypsy jazz and hip-hop share a similar inventive, cavalier spirit, and both pledge unswervable loyalty to the beat. Where hip-hop lays it down with the 808, gypsy jazz rhythm is even more old-school, pumping out fat beats with a technique known as “la pompe.” To pimp the pompe, then, is to blend these bold, innovative styles into a brand-new sound that sets the mood for Django Reinhardt and Snoop Dogg to sip Chandon and be equally entertained.

Since their first show in 2018, the Pimps of Pompe have been catching ears all over Asheville with their unique and playful “swing with swag,” and are looking forward to spreading the joy even further with regional touring in support of their debut album release in spring of 2020.