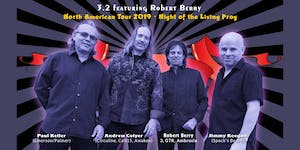 iCal
Google
Robert Berry brings Keith Emerson's last album "3.2: The Rules Have Changed" to life w/ some of the finest players on the Prog Rock scene.

Things just got a lot better for Prog Music Fans – and fans of genuine classic bands with great players. Robert Berry has assembled a killer four-piece band set to begin playing this year. For those who appreciate the fine craftsmanship of YES, ELP, Keith Emerson, Genesis, Jethro Tull, etc… are in for a real treat. Berry is riding high with his latest release “ 3.2: The Rules Have Changed ” written with Keyboardist Keith Emerson . Berry is well known for his Bass, Vocals and as a multi-instrumentalist who’s written and toured with Carl Palmer , Steve Howe (Yes) , GTR , and Ambrosia to name a few. Rounding out the group are Drummer Jimmy Keegan (Spock’s Beard), Guitarist Paul Keller (Emerson/Palmer) , and Keyboardist Andrew Colyer (Circuline, Cell15, Awaken). Aside from all the heavy instrumental lifting, all four band members sing – a pleasant surprise in today’s music world. The word has been spreading quickly, and already 3.2 will be headlining at this year’s ProgStock Festival -- an annual 3-Day Festival in Rahway, New Jersey this October 11-12-13. ProgStock is the gem of the Prog Music Festivals in the North East U.S. and continues to bring in more prestigious acts every year.

About Robert Berry : Berry is an American musician, songwriter, and producer. He’s co-written with Steve Howe for the band GTR , he’s a former Ambrosia band member. He drew a lot of attention for his work re-arranging/re-recording of the YES hit “Roundabout” for Magna Carta Records, drawing some to label him as a crafty American version of Trevor Rabin . Yes, there are many similarities between the two. Now Robert Berry has announced the live touring band for the #1 Amazon and Billboard charting album, “3.2 - The Rules Have Changed” written with the late Keith Emerson . Emerson and Berry formed the band “3” in the 1980’s with Carl Palmer, and had the #9 Billboard hit “Talkin’ Bout”. Their debut album “To The Power of 3” charted well on the Geffen label – well known at the time for their other artists like Peter Gabriel , etc.

In 2015, a radio station in Boston unearthed some old tapes from the 1988 “3” tour, and released them as a live album. After hearing that live performance, Keith Emerson was inspired to reunite with Berry, resuming work on the unfinished second “3” album, now titled “3.2”. It was released on the Frontiers Records label. With Emerson’s tragic passing in 2016, it appeared the new album might not get finished.

Spring of 2018, and Berry had worked out the details with the Emerson estate and Frontiers to complete and release the record. The first single, “Somebody’s Watching” (released May 22, 2018), saw the album debut at #3 on the Amazon hard rock charts, and generated 7,000 YouTube views in the first 36 hours, and over 12,000 views in the first week. A musical phoenix had indeed risen. The album was released on August 10, 2018, and hit #1 on Amazon, selling out in five countries on the first day, and placed on two Billboard charts. The two YouTube videos from the album currently have over 75,000 cumulative views. The new album has met with unanimous positive international acclaim from over 100 magazine articles, blog and website reviews, and FM and internet radio stations. Berry, Keegan, Keller and Colyer began live rehearsals in November 2018, and are looking forward to not only performing the great last work of Keith Emerson, but will also be pulling from Berry’s 30-year history of Progressive Rock, and also his work with Steve Howe, some from Ambrosia, some of his solo work, and of course his re-worked tribute albums for the Magna Carta label, which include the music of YES, ELP, Genesis , and Jethro Tull .

More Than Just a Concert – It’s An Event: With his 30 year history of playing side-by-side with some of Pro and Rock music’s elite, Berry has a few entertaining stories to tell as well. So it’s more than just a concert, the shows will include an evening of firsthand stories and recollections sure to raise a few eyebrows along the way. ProgStock is one of music’s premiere interactive events where the artists and fans mingle; they hang together, drink together and bond over more than just music. The 3.2 shows will be exactly that as well – and isn’t that a welcoming idea – for fans not only to enjoy the music but to jump in the pool with the musicians that create it.

Guitarist André Cholmondeley visited Asheville as early as 2001 when his Frank Zappa tribute band Project/Object played a show at Stella Blue (now the Asheville Music Hall). By 2006, he had moved here from New Jersey, and his career had taken a major, unexpected turn. In the space of just a few years, he went from just playing the music of his rock heroes to working with many of them.

As a guitar tech and tour manager, Cholmondeley began working with a succession of top-notch names in music. By 2011, he was the technician for Yes guitarist Steve Howe; he toured Europe and the U.S. several times with the band, and just wrapped up a February tour with the group.

Cholmondeley’s move into tour management and “teching” happened by chance. One day in late 2006 when he was still in New Jersey, he was chatting with a friend, sharing plans for the coming weekend. “I’ve got this gig I’m supposed to do, but I’m too busy,” Cholmondeley’s friend told him. “I’m supposed to go ‘tech’ for Al Di Meola … hey, you should do it, André. They’re looking for someone for the weekend.” Cholmondeley demurred, thinking he wasn’t qualified for the job of the jazz guitarist’s onstage technician, or even working as a member of his road crew.

But that evening, he gave the opportunity some thought. And then he realized, “Wow – I’ve actually had the training for this!” His years leading Project/Object found him handling most or all of the duties this one-day gig would require, even though he hadn’t been doing them in an official capacity.

The next day, he got in touch with Di Meola’s assistant, and fielded a barrage of questions. He recalls his answers. “I’m not a luthier, but yes, I can set a guitar up. I can change the pickup, I can change the jack, tune the guitar, set up amps, et cetera.” He was told, “Okay. We’ll see you. Just come to this address on Friday afternoon.”

Literally overnight, that one-day gig turned into an international tour. “I learned a lot from Al,” says Cholmondeley. “It was a trial by fire. He’s definitely a perfectionist, a stickler.”

What’s more, Cholmondeley soon realized that life on the road with Project/Object meant that he had the skills and experience to be a tour manager, too. “I didn’t know it – and I didn’t call it that – but because I was the band leader, right away I was figuring out the money, renting the van, booking the hotels.”

By 2011 Cholmondeley began working for Yes’ Steve Howe; the February 2017 tour is his fourth with the group. Along the way he got to know the band members quite well, so when founding member and bassist Chris Squire died in June 2015, the loss was both a musical and personal one.

Cholmondeley also worked closely with Greg Lake and Keith Emerson for several years. He toured with them together and separately, and was a technician at the final ELP concert in 2010. Cholmondeley can be seen onstage – albeit briefly – in the commercially-released DVD of that concert.

The chemistry between Cholmondeley and both men was obvious, and extended beyond a working relationship; when Emerson visited Asheville for the 2014 Moogfest, he spent most of his free time with Cholmondeley. And on Lake’s 2012 solo “Songs of a Lifetime Tour,” the guitarist made a point of introducing – by name – his technician/road manager to the audience. Both Emerson and Lake died in 2016.

The behavior of some artists can seem quirky or even intimidating to outsiders who meet them in person. Steve Howe, for example, won’t shake hands with strangers, lest he run the risk of damaging his hands. Like Emerson and Lake, he – and in fact most for whom Cholmondeley has worked, a list that also includes David Torn, John Wetton, moe., Derek Trucks, violinist Eddie Jobson and many others – has a reputation for being very demanding. “I think they’re all perfectionists,” Cholmondeley says. “And I have no problem with that,” he says. “That’s how we got those albums!”

Rather than advertising his services, Cholmondeley has been content to let his work speak for itself. “Every job I’ve gotten is because I met someone” while working, he says. “And they just know, ‘Hey, I worked with this guy on this previous tour, and he did a good job.’”

Cholmondeley has taken to heart the lessons he’s learned along the way. “I’m still in this balance,” he says. “I’m a musician, and I do guitar tech work.” Other than learning one’s craft, his rules for being successful working as a tour manager/technician are quite simple. “Be nice to people,” he says, “and do your job.”